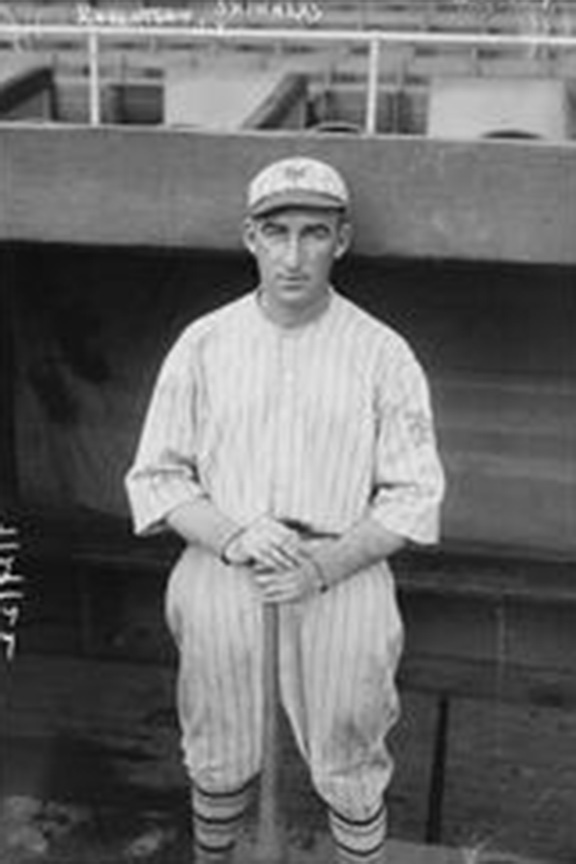 Ralph Peter Shinners was a centerfielder in Major League Baseball who played from 1922 through 1925 for the New York Giants and St. Louis Cardinals.  Listed at 6 ft 0 in (1.83 m), 180 lb., Shinners batted and threw right-handed.

Brief Profile:  Born in Monches, Wisconsin, Shinners is the only major league player to come out of the Marquette University in Milwaukee, Wisconsin. He enjoyed a solid career in the Minor Leagues, hitting a .300 batting average or more in seven out of nine possible seasons. Shinners was used sparingly in the major leagues for three seasons, but he never was able to fulfill the potential that he showed in the minors.

Professional Career:  Shinners started his professional career in 1920 with the American Association Indianapolis Indians, playing for them two years. In 1921 he fairly blazed in the league, batting .346 and stealing 52 bases in 164 games with Indianapolis, more than any other player in organized baseball was credited with. He also hit 50 doubles, 26 triples, and 13 home runs for a .552 slugging percentage.  Late in the year, New York Giants’ manager John McGraw obtained Shinners, sending to the Indians in return for him outfielders Eddie Brown and Vern Spencer, two other players to be named later, and $25,000 in cash.

Shinners played briefly for the Giants in part of two seasons, being a member of two World Series champion teams in 1922 and 1923, though he did not play in the Series. At the end of the 1924 season, he was sent by the Giants to Double-A Toledo Mud Hens in exchange for outfielder Lee King.

In 1924 Shinners hit .300 in 148 games for Toledo, before joining the Cardinals in 1925 for his last major league season. In St. Louis, he posted a .295 average with seven home runs and 36 runs batted in in 74 games, while serving as a backup for outfielders Ray Blades, Chick Blades, Chick Hafey, and Heinie Mueller.

Shinners also managed the Kenosha Comets of the All-American Girls Professional Baseball League during the 1947 season.  He then moved to Milwaukee, Wisconsin, where he died at the age of 66.

Acknowledgment:  Twenty six years after his death, Shinners became part of the AAGPBL permanent display at the Baseball Hall of Fame and Museum at Cooperstown, New York, which opened in 1988, and which is dedicated to the entire league rather than any individual.