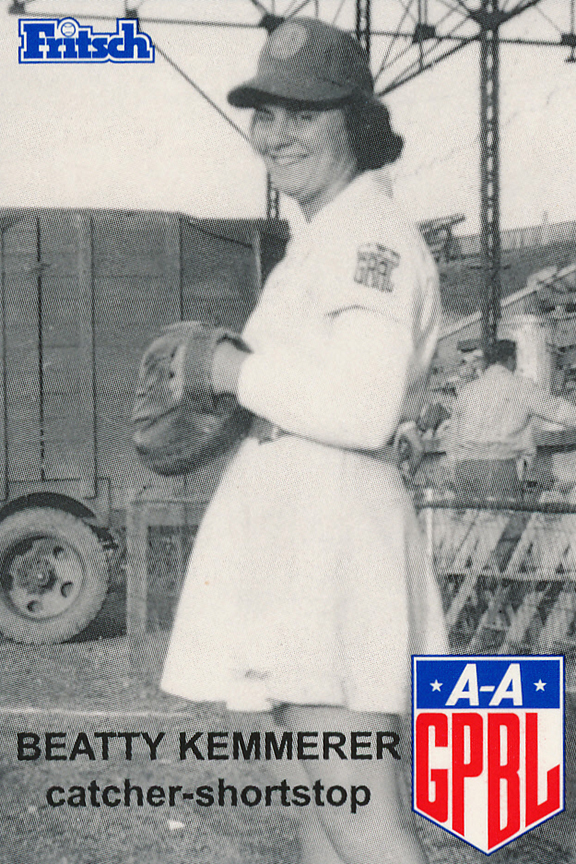 Newly-signed players were often placed on one or more teams within the season, due to the League Rookie Rule,

that each team must have a playing rookie. Beatty fell into this situation in 1950, spending one month with Fort Wayne

and the remainder of the season with South Bend.    Returning in 1951 for a brief stint.

Beatrice “Bea” “Beatty” L. Kemmerer, 83, formerly of Bremen, passed away at 5:10 am Saturday, November 2, 2013 in Milton Home, South Bend.  She was born February 23, 1930 in Friendsville, PA to the late William and Cora (Cress) Kemmerer. Bea was also preceded in death by her sister, Ellen Bowers; and brothers, Gilbert, Ralph, Stanley, William Jr. and Harley Kemmerer.  She is survived by one brother, Luther Kemmerer of Quakertown, PA; one sister-in-law, Elenor Kemmerer of Allentown, PA; and her dear friend, Bonnie Robbins of South Bend.

Bea moved to the Michiana area in 1951 coming from Pennsylvania. She retired in 1992 after 42 years with Uniroyal. Bea was quite an athlete in her younger years.  She played, coached and umpired fast pitch softball. She played on the team for the Spaghetti Bowl Restaurant in Elkhart, who was also her sponsor. She went to the state play-offs several times. Bea also coached and played softball for Plain & Fancy in Goshen. She enjoyed umpiring for St. Joseph Catholic School volleyball teams.

Bea played a half season for the Ft. Wayne Daisies before leaving due to a minor injury. She then went to play for the 1951 South Bend Blue Sox Women’s Professional Baseball Team and was inducted into the Hall of Fame.  She also played a part in the movie “A League of Their Own”.

She was also a member of the South Bend/Mishawaka Parkway Lanes Bowling League for 40 years, for which she was inducted into the Bowler’s Association Hall of Fame. In fact, she participated in 40 national bowling tournaments.

Bea was an avid Notre Dame volleyball and women’s basketball spectator for many, many years.

Funeral services for Bea will be held at 4:00 pm Friday, November 8, 2013 in the Palmer Funeral Home - River Park Chapel, 2528 Mishawaka Avenue, South Bend with Rev. Larry R. Biller officiating. Friends may visit with the family from 2:00 pm until the time of services on Friday in the funeral home.

Expressions of sympathy in memory of Bea may be donated to the National Kidney Foundation, 30 E. 33rd Street, New York, NY 10016 or the American Diabetes Association of Northern Indiana, 7363 E. 21st Street, Indianapolis, IN  46219. Online condolences may be left for the Kemmerer family at www.palmerfuneralhomes.com.