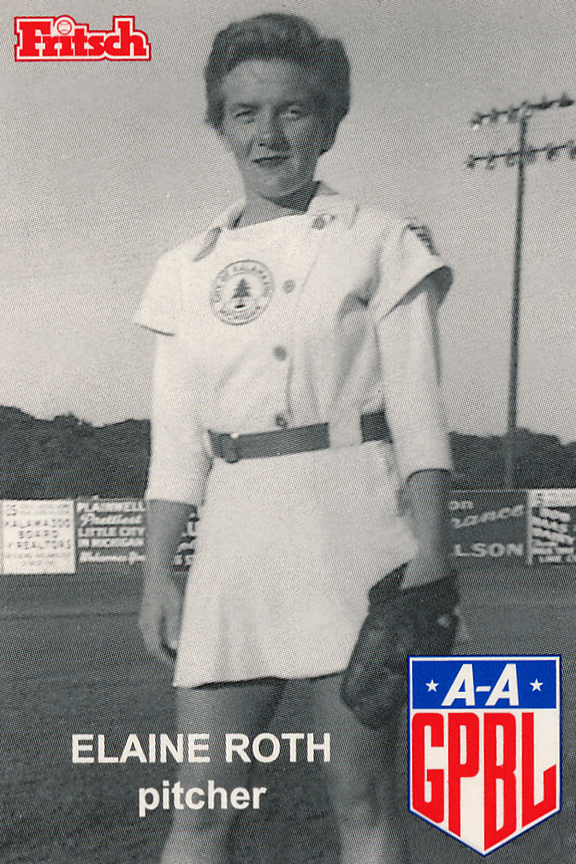 Elaine "E" was the older twin who was a pitcher. She was an outstanding rookie who started out as a second baseman but was converted to a pitcher with a great sidearm hook. In the off-season she was an upholsterer and loved to sing duets with her sister.

Elaine was born January 17, 1929, in Michigan City, IN., the daughter of Herman Henry and Elsie Louise (Kamnatzki) Roth, and had been a resident of the Portage area for many years

She was employed by the Upjohn Company for 32 years and attended the United Methodist Church. She died May 25, 2007.

Elaine began her professional baseball career in 1948 with the Peoria Redwins along with her identical twin sister Eilaine. She remained there two years then was traded to the South Bend Blue Sox. In 1951, she was assigned to the Kalamazoo Lassies, where she was re-united with her twin sister. The duo finished their professional career with the end of the League in 1954. They were both recognized by the Baseball Hall of Fame as members of the All-American Girls Professional Baseball League. Elaine also played industrial league softball and competed in the Senior Olympics.