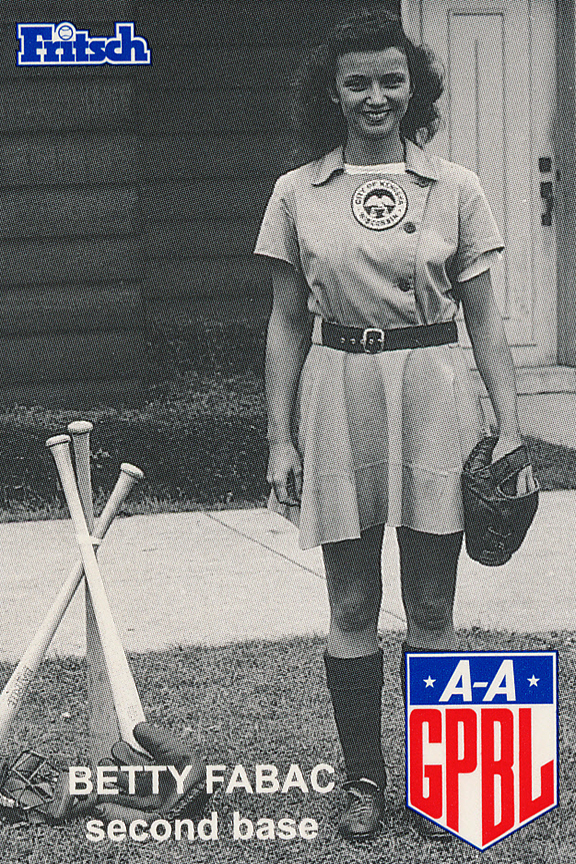 Betty was born April 6, 1922 in Detroit, Michigan.  An excellent athlete, Betty became a member of the All-American Girls Base Ball League’s Kenosha Comets in 1945 and served as the Comets’ steady second sacker through the 1948 season.  Her baseball card attests that she especially “enjoyed spring training in 1946 when [the teams] had the opportunity to tour military bases and the Southern states.”

Betty’s baseball card also noted that she “was an avid golfer and at one point won eight consecutive golf championships in Jackson, Michigan.”  She was also an avid bridge player.

Betty married Ralph Bretting October 9, 1948, and they raised daughter Patti and son George in Jackson, Michigan.  After the children were married in the 1970s, Betty and Ralph moved to southern California where Betty took a job at Data Card Corporation.  According to daughter Patti, she enjoyed her work there for ten years and continued to pursue her love and mastery of golf on the side.

Betty was Ralph’s caregiver for 15 years after he suffered a stroke which was followed by other health issues.  Ralph passed away in 1998, and Betty moved to northern California in 2001 to live with daughter Patti who cared for her for six years before she entered The Vistas Assisted Living facility.

Betty was preceded in death by her mother Frances and her father Joseph Fabac, her husband Ralph, sister Frances, and niece Anita Scotti.