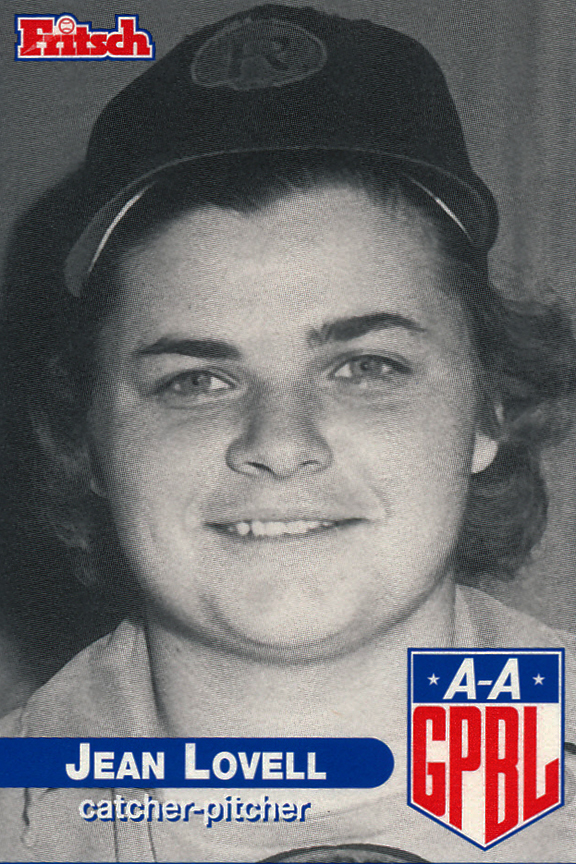 Jean was a strong catcher and was considered one of the best long ball hitters. She was an All-Star catcher while playing in Kenosha.

One of Jean's teammates remembed it as clearly as if it happened the other day.

“We were playing a game of catch at recess out on the playground,” the Conneaut resident said. “And she threw one ball so hard, it ripped off the top of the webbing of my glove and hit me right in the nose.

“It bled like crazy! In fact, I bled all the way across the playground, up the steps to the school and for a long time after that.”
Of course, the incident didn’t happen the other day.

It happened in 1937 at Amboy Elementary School, located on South Amboy Road near Route 20 in Conneaut.

And that teammate short, either. It wasn’t like she was playing catch with your average fourth-grader at Amboy Elementary School.

She was playing with Jean Lovell, who would go on to fame as a player in the All-American Girls Professional Baseball League, the loop the classic 1992 movie “A League of their Own” made another generation aware.

“She aimed the ball at me, apparently, with all her power — which was considerable — even at that young age, I just wasn’t quick enough on the receiving end and it really did connect right with my nose!”

Along with the trail of blood, her poor friend left as she staggered her way back inside the school’s front doorway, Lovell’s missile left some other tracks.

“It went all the way down the hallway and to the restroom!” she said. “It seemed my whole face was black and blue and sore for weeks after that.

“Jean felt so bad, but it wasn’t her fault. She was just such a tremendous athlete, even at that age. I just wasn’t good enough to catch it.”

Lovell was born in Conneaut, Ohio on Nov. 21, 1926. As her friend's playground tale points out, she attended Amboy Elementary School.

“But then I went off to Rowe in sixth grade, so I lost track of Jean,”

While Lovell spent some time at Conneaut High School, her family moved just east into Pennsylvania. She ended up graduating from Abington High School in Abington, Pa.

She played high-level competitive softball after graduation, mostly in Conneaut and Painesville, according to a story in the Conneaut News-Herald, before making the jump to the AAGPBL in 1948.

“I wasn’t surprised whatsoever that Jean became a professional ballplayer,” her teammate said. “She was so strong and so athletic, even during those days we were in grade school together and out there playing ball in recess.

“It was obvious to all of us Jean was just so superior to all of the rest of us. None of us were surprised when she went on to play professionally.”

Lovell, who was nicknamed “Grump,” joined the Rockford Peaches, the team made famous in “A League of their Own” by the likes of Geena Davis and Madonna and managed by Tom Hanks, in 1948 as a 22-year-old catcher and part-time pitcher.

She spent the first two seasons of her career with the Peaches, winning back-to-back league championships in the process.

As portrayed in the movie, the schedule was long and the travel, all done by less-than-plush bus.

In addition to playing good quality ball the “girls” were expected to project a wholesome, feminine image. This included wearing uniforms that consisted of a skirt worn over shorts and high stockings that nevertheless left a good portion of the legs bare. Players were also expected to follow long and complex rules of personal care and etiquette both on and off the field.

“While she didn’t really talk a lot about playing ball, she did talk about the fact the league made each and every one of the players go to charm school,” her sister-in-law said with a laugh in her Mill Village, Pa. home, where she resides with her husband, Donald. “She really didn’t talk much about playing professional baseball. I guess to Jean, it was just something she did.”

Her teammate said the schedule was difficult, even to a tremendous athlete like Jean.

“She had really, really bad knees,” Delores said. “All that up and down as a catcher was very hard on her, I’m sure.”

After winning back-to-back championships with the Peaches, Lovell signed with the Kalamazoo Comets in 1950. While having played only 52 and 26 games in her first two professional seasons, Lovell became a fulltime player when she moved on to Kalamazoo, playing for the Lassies in 1950 and 1951.

She was traded to the Kenosha Comets for the second half of the 1951 season, but rejoined the Lassies in the summer of 1952, with whom she played the rest of her career.

In her final season as a professional — the summer of 1954 — Lovell had a monster season.

She played in 82 games, hitting .286, but became a true slugger. Twenty-one of Lovell’s 74 hits were home runs, which led the league, and she drove in 69 runs.

Those 21 roundtrippers accounted for all but four of her 25 career home runs, which ended up being the most by any catcher in the history of the league.

At age 28, though, Lovell’s professional career came to an end — as was the case for all of the players in the league — as the curtain came down on the AAGPBL as it folded.

While her days as a professional baseball player were finished, Lovell’s life certainly was not. She married her husband, Harold Dowler, on Nov. 1, 1959.

Sitting in her living room, her sister-in-law said Jean and her brother-in-law lived a full, adventurous life together.

“She was so talented, Jean was good at everything she decided to do,” she said. “She was ahead of her time as a woman. She played golf, she bowled, she rode motorcycles... there wasn’t much she didn’t do.”

And that included spending quality time with her husband.

“Jean and Harold raised German shorthairs together, They lived here in the county in Union City.

“They were such a wonderful couple. They had a great life together, full of good times and adventure.”

In addition to the chronically sore knees Delores referenced, Jean had an appendectomy that limited her to 55 games in the 1952 season. She came home to Amboy to recover.

But in her later years, those problems became much more serious as she was beset by kidney problems, which forced her to dialysis.

“That was hard on Jean,” Delores said.

Her friend said Jean was in full possession of her faculties when she decided her time had come. She had had enough of the dialysis.

Jean planned exactly the funeral she wanted when she made the decision that she knew would mean the end of her life — to be taken off her kidney dialysis machine. That decision led directly to her death, which came January 1, 1992, diabetes being her official cause of death.

She was 71. She is buried in Waterford Cemetery in Erie County, Pa.

Still, Jean’s love of sports, most notably, baseball, never waned, even though her friend said she didn’t talk about it much after her playing days were finished.

“Jean ordered an arrangement of yellow roses with her catcher’s mitt inside of it,” author Susan E. Johnson wrote in her 1994 book, “When Women Playe Hardball.”

“And when they closed the lid of her casket for the final time, her catcher’s mitt went inside with her.”

Which proves the character Hanks portrayed so well in “A League of their Own” was incorrect.

There IS crying in baseball.