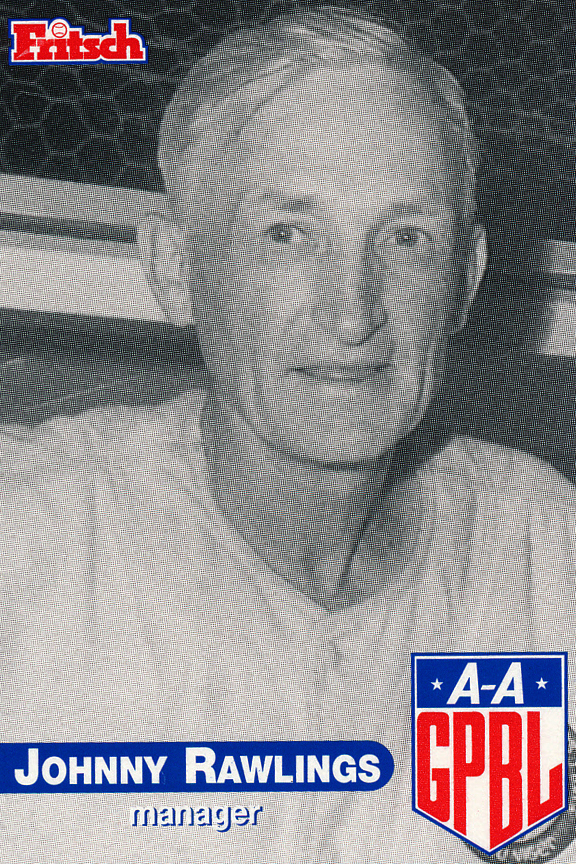 Johnny came to the AAGPBL and Grand Rapids in 1946. Set on becoming a lawyer, he entered the University of Southern California and then was forced to sneak out to play baseball on the sly. Like many other youngsters the baseball bug bit hard, and Rawlings elected to postpone the law career for a whirl at professional baseball. It was a decision he has never regretted.   He managed three different teams in the league, including the 1947 Playoff Champion and 1948 League Champion Grand Rapids Chicks. He also acted as the AA league scout in the off season.  John played second base on the World Series winning teams with the New York Giants in 1921 abd 1922. He also played for World Series winner the Pittsburgh Pirates in 1925.  He played a total of 13 years (1914 to 1926) in the Major Leagues.

John William Rawlings was a second baseman and shortstop in Major League Baseball who played for six different teams between the 1914 and 1926 seasons.  Listed at 5 ft 8 in (1.73 m), 158 lb., he batted and threw right-handed.

A native of Bloomfield, Iowa, Rawlings attended high school in Los Angeles, California.  He started his professional career in 1922 with Vernon Tigers of the Pacific Coast League.

Rawlings entered the majors in 1914 with the Cincinnati Reds, appearing for them in 33 games before jumping during the midseason to the Kansas City Packers of the outlaw Federal League.  After one and a half seasons in Kansas City, he spent 1917 with the Toledo Iron Men of the American Association.

Following his major league career, Rawlings played in the minors until 1930.  He later coached for a long time and also managed during eight years in the All-American Girls Professional Baseball League for the Grand Rapids Chicks (1946-50), Peoria Redwings (1951), and Rockford Peaches (1953-54).  He led his teams to six playoff appearances, including a Championship Title with the 1947 Chicks.

Rawlings died in Inglewood, California, at the age of 80