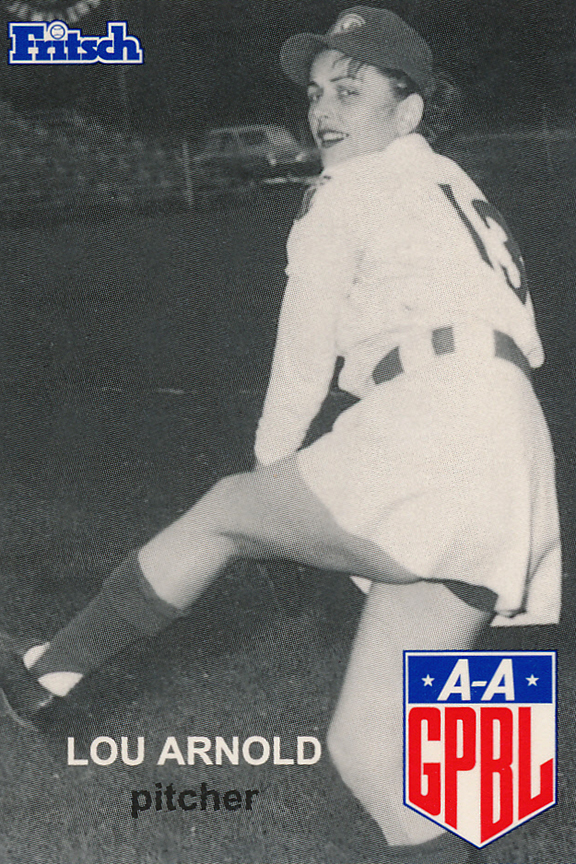 Hear about Lou's experience in her own words through the Grand Valley State Oral history project.

Every once in awhile, you can trace a life-altering experience back to a single sentence. One such sentence for me came when my mother and I were planning a trip to Fort Wayne and South Bend. In a phone conversation, I asked Dottie Collins whom I might be able to contact in South Bend. She said “Call Lou Arnold. She’s everybody’s friend.” I took Dottie’s advice, and ever since that first phone conversation in 1994, Lou has been one of my best friends. As everyone knows, Dottie’s statement was right on the mark.

Lou said as a child, she was a tomboy, and began playing baseball with the boys. She was asked to play on a softball team (The Rehoboths Milkmaids). Most of the girls were from farms, and they were a great bunch, she recalled. She also enjoyed time spent with the Riverside Townies, as well as other teams. She usually played shortstop.

It was with the Townies that Lou was scouted for the AAGPBL. “We were playing in Newport against the Navy team. One of the scouts came up and asked me if I would like to play professional baseball,” she said. “I didn’t know that much about it. I just thought he was passing time. Then letters came from Max Carey. He sent a ticket to Opalocka.” That was in 1948. “Everybody was so kind to me,” Lou said. “There were a lot of veterans on that team (The Blue Sox). She recalls calling home all the time, as it was the first time she had been away from home.

Lou is a strong believer in the team concept, that no matter how good a player, she certainly couldn’t carry a team alone. “The ones that are stars were made that way by those of us who were not good enough to be stars.” (Or, as she says “stahs”.) “No matter what you do on a team, you’re part of it, and you help. I don’t care if you’re a star or pick up balls or keep score. They’re all as important as the ones who hit homers.”

Once Lou became a Blue Sox player, she never did anything but pitch. She recalls one game where she threw a one-hitter as a highlight, but that wasn’t THE highlight of her playing days. “My big highlight is Jean Faut’s no-hitter and the championship (in 1951 & ‘52). That was the biggest thing. But nothing will ever top Cooperstown. That’s my field of dreams. That’s the thing that warms my heart the most.”

Anyone who knows Lou at all knows that she loves to laugh and have a good time. There were many of those on and off the field. She remembers going to Grand Rapids with Jeep Stoll and Lil Faralla in an old car with an interior that was completely covered with red and white checked cloth. A spark from someone’s cigarette caught the cloth on fire “and the red and white went right up! We had to play that night. We decided that no one would smoke anymore on the way home. I still can hear Lil yelling ‘There’s a fire behind Lou! Stop the car!’ We laughed a lot later!” she said. “That car took us all over. I loved that car.”

Lou left the Blue Sox when she found out she could get a good job at Bendix. There was already talk of the League folding in a year or two. Although she got letters from Karl Winsch asking her to come back, she had her mind made up. She ended up staying at Bendix exactly 30 years to the day.

Lou missed the League after she left, but hasn’t missed a reunion yet, and says she doesn’t plan to. She said that she loves seeing everybody, laughing, talking, and visiting. She was part of the planning committee for the 50th anniversary reunion in South Bend, along with Pee Wee Sears, Fran Janssen, Lib Mahon, Betsy Jochum, Nancy Rockwell, and Twi Shively.

Lou also loves meeting associate members at the reunions. “We have the best associate members of any organization”, she said. “You never meet anyone but a friend when you meet an associate. Everybody feels welcome at the reunions. It’s not just ours (the players), it’s ALL of ours. “That’s the way it should be. I feel it shows when we have the reunions. We’re all friends. When we needed someone you (the associates) were there. And when we’re not here, you have to be here for us. I’m so touched by the cards I get from associates and fans. Who was I?” Maybe I’m biased by our weekly phone conversations for the last six years, but as far as I can see, who she was (and is) is one of the most special people any of us could ever hope to meet.

Louise “Lou” Arnold, 87, passed away Thursday, May 27, 2010.  A native of Pawtucket, Rhode Island, Lou established permanent residence in South Bend in 1952.  She first came to South Bend in 1948 to become a member of the South Bend Blue Sox of the All American Girls Professional Baseball League.  Lou spent four years with the team as a pitcher during which time she became so fond of South Bend and her many friends established in the area that she chose to remain here.

In 1951 Lou contributed significantly to the success of the Blue Sox in winning the AAGPBL League Championship.  During that year she led the league with a winning percentage of .833, tossed 32 consecutive scoreless innings, pitched a one-hitter and had 9 complete games out of 11 starts.

She had a thirty year career with Bendix Corporation where she worked on the brake line.  After retirement in 1982 she focused much of her time and energy visiting friends and family and traveling to reunions of the All American Girls Professional Baseball League where she treasured the moments spent with former players of the league.  She spent countless hours responding to request for autographs and corresponding with young athletes interested in hearing of her days in the AAGPBL.  Lou was inducted into the South Bend Baseball Hall of Fame in 2005.

Lou was a devoted fan of Notre Dame Women’s Basketball.  Her season ticket location, just behind the Irish bench, gave her plenty of opportunities to offer Muffet McGraw coaching tips and lend words of encouragement to the team.

As the youngest of thirteen children, Lou selected #13 for her AAGPBL uniform.  She was preceded in death by her parents, George & Mary Ann (McCormick) Arnold, seven brothers and five sisters.  A private funeral with burial was held in Pawtucket, Rhode Island at a later date.