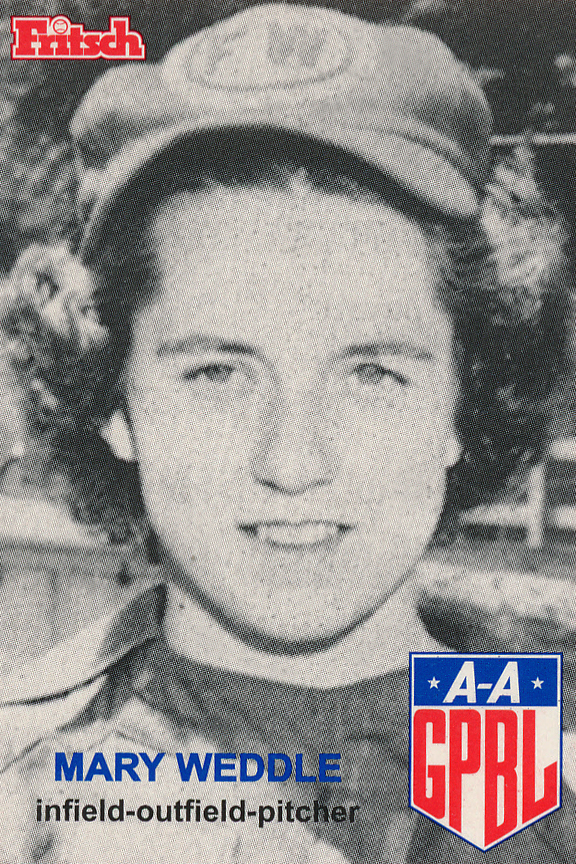 Hines, Mary Weddle
By Jeneane Lesko
Mary Weddle was her playing name and she was a student of the game. Mary grew up on a farm, one of 16 children, ten of which were brothers! "I watched them play, asked them questions, asked them what to do when playing a new position and they answered me!" she said enthusiastically. "My brothers were fantastic. When I was old enough, they would let me play outfield, first base and short stop. It was a time when all the hard work on the farm paid off. I was very strong. My mother said she remembered me throwing rocks every spare minute! But I remember picking up the walnuts all over the ground and throwing them at the knot holes in the trees. It was a great way to get a real accurate throw!" Mary continued, "I could run fast. I wasn't big at 115 lbs, but between working the farm and practicing throwing I could throw from the outfield to home plate with no bounce.

In the 7th and 8th grades I played shortstop on the boy's team. There were no girl's teams. We played school rules and the boys didn't mind. They were my role models. They taught me to take the bumps and bruises and not make a fuss about it." In 1953 Mary was playing with the A-1 Queens in Phoenix, AZ. The Queens were playing a heavy schedule, April 1st through September ending with a World Tournament in Portland, OR that included 60 teams. Mary recalled, "At the world tournament they had the fastest girls from each team compete in a sixty yard dash. I won the dash and received a box of candy that my teammates really enjoyed." The Queens had won the tournament three years in a row and that year they came in 4th.  Mary also remembered pitching in an exhibition game with the Queens against a men's team. They switched pitchers and catchers and I beat my own team!"

During this time Mary met Snookie Doyle, an All American shortstop for the Rockford Peaches. Snookie told Mary about the AAGPBL and encouraged her to tryout for the league. Mary rode the bus for 3 days and 2 nights from Phoenix to Ohio to attend tryouts. Bill Allington called her in the spring of 1954 and asked her to report to Fort Wayne. Mary said, "Fort Wayne was a lot closer to Ohio than Phoenix so my brothers and mother got to watch me play and that was really neat. Jean Havlish, Fort Wayne's short stop was out with an injury so I played shortstop for three weeks and then outfield and then 3rd base. I remember one game, I was playing right field and our pitcher was struggling. So, Bill put me in as pitcher! All he said was 'throw the ball hard!' Well, things went well. The catcher told me, 'The ball is moving all over the plate. Keep the heat on and keep it coming!' I got out of that game with a one hitter and became a late inning game saver!"

Mary also remembered, "Once, I started a game and went to the end and I was so thrilled when my teammates gave me the game ball." Mary continued," I felt so fortunate to make the team, the players were all good, so good, the Weaver sisters, Joanne and Betty Foss Weaver, Rose Gachioch, Dottie Collins, Jean Geissenger and on and on.

One time we had a day off so we all went out on a boat and stayed in the sun all day. Oh the sunburn we got. We could hardly play that night. Bill Allington was so mad at us. He had us report to practice the next morning at 7AM. We practiced all day and had a double header that night. We won those two games! Bill was a wonderful manager, a true gentleman who treated us all like ladies. He would compliment us when we dressed up to go out and he did not have a fowl mouth. I really appreciated that. It was an awesome run! It was sad to see the league fold and I are sorry it's not here today."

Mary recalled meeting Karl Winch, another AAGPBL manager and his boys up at the Hall of Fame. Mary said Karl commented on how hard it was to get the fans out to the ball field but he said, "Once we got them there they always came back. They were blown away by the quality of play."  "To play and get paid for it was just unreal" said Mary." I can't take the whining in baseball today with the money they get paid.   I'd like to take them out to the woodshed!  I would have played for a place to sleep and something to eat. I don't understand how you get tired playing ball!

Mary fondly recalled the Fort Wayne reunion and the "Run Jane Run" three inning exhibition game with the All-Americans, "The gals were snapping up that ball like nothing, just like the old days." said Mary. Mary had just finished playing in a state tournament after a full season of ball, two and three nights a week. So she came ready to play. Mary played shortstop for the All-Americans and when a hard ground ball was hit to her she stepped on second and turned a double play. Mary recalled that Jean Geissenger, her former teammate was playing second. "Jean said to me, 'I saw that look on your face...that look! I'll take it and throw to first.'  Playing with the girls again was so exciting!"

After leaving the league, Mary married in 1955. She had three children and five grand children. Mary has coached middle school and her granddaughter's high school team, the Corbin Lady Redhounds to a district championship. "It's amazing," said Mary, "We have a beautiful ball field, new uniforms, I'm so grateful. I've coached with my daughter and son in law. Title IX allowed all of that and we're very proud of it." Mary played in a slow pitch league until she was 68.

Today, at 75 she has a new knee that is "working good". Mary still goes to the middle school to help coach and teach the basics. She said, "As long as I can crawl out there... the middle school children are so anxious and eager to do it right. It has been so much fun for me, with my daughter and granddaughters. It has been a long ride yet it seems like yesterday I began to play." Mary says she would like to play ball until she is 80 and then become an umpire. She commented, "I won't be able to see or hear them and they can yell all they want!" When Mary is asked, "Why play ball?" she answers, "Because it's fun. You catch and hit that little ole white ball and it takes away all the stress.

Mary says speaking to groups about the league comes easy. "Being from a large family, my father was a preacher and two of my brothers were auctioneers, they call me 'Flipper Jaw'!  But, I encourage my listeners to be who they are - enjoy life and be good to people and treat others as you would be treated. People say if I die in church or on the ball field, I'll be the happiest girl in the world, but don't let me go sittin' in a chair unless I'm watching a ballgame."

Remembering how difficult it was for women to get any recognition back when she played ball, Mary reflected upon a time when she and her brothers, all athletes in their own right, were invited to a regional Hall of Fame banquet. While walking with her brothers, she overheard some people comment, "Oh there goes 'that girl' who played ball and the Weddle boys, they all played ball and 'that girl'!" Mary's reply, "For those of you, Mary Weddle Hines is my name." Here's to you Mary Weddle Hines, one proud All-American.
Contributed by: Jeneane Lesko
Submitted on: 06/28/2011

Mary Lola Weddle Hines (87) of Park Hills Road in Corbin, Kentucky, passed away on October 31, 2021, at her home with her family.

“Let not your heart be troubled, ye believe in God believe also in me. In my father’s house are many mansions, if it were not so, I would have told you. And if I go and prepare a place for you, I will come again and receive you unto myself, that where I am there ye may be also.” John 14:1-3.

Mary Lola Weddle Hines was the daughter of the late William Arthur Weddle and Dorcas Lola Febus Weddle. She was born on April 26, 1934, in Woodsfield Ohio. On August 5, 1955, she was united in marriage to Lewis H. Hines of Graysville, Ohio, and together they raised three children. She was a devout Christian and a member of the Mill Street Church of Christ where she remained faithful and dedicated to the Lord as long as her health permitted.

Mary was raised on a farm in rural Ohio, living and working alongside her fifteen siblings. Of her many childhood memories, her time playing baseball with her ten brothers proved most formative. Used to playing with her brothers, Mary joined her school’s baseball team in the 7th grade—she played with the boys, as there was no girls’ team. Eventually, Mary played her way to the big leagues. Mary played professional baseball for the Fort Wayne Daisies in the All American Girls Professional Baseball League. She also played professional fastpitch softball for the Phoenix Queens.

Mary is a member of the Baseball Hall of Fame in Cooperstown, New York, the Kentucky Prep Softball Hall of Fame, and earned the TRISPY Lifetime Achievement Award. An Historical Marker in her home state of Ohio recounts Mary’s illustrious career. In 2019, Mary and her Granddaughter, Abby Baylor, were inducted into the Corbin High School Hall of Fame. Mary coached softball at Corbin Middle School and Corbin High School, inspiring many with her story as a pioneering female athlete.

In addition to her husband, Lewis Hines, she was preceded in death by her parents William A. Weddle and Dorcas L. Weddle; and by ten brothers and two sisters,

She is survived by her three children, a son-in-law, five grandchildren, one great grandson, one brother, and two sisters. She had a multitude of nieces and nephews who also mourned her passing. She will also be remembered fondly by her many players, fans, friends, and neighbors.