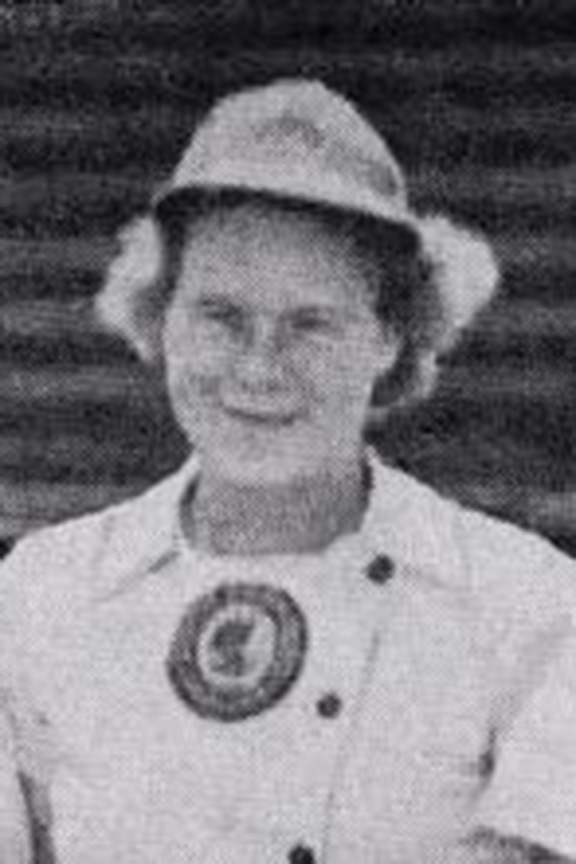 Englewood-born Mona Denton pitched two seasons in the All-American Girls Professional Baseball League in 1946 and 1947. She is pictured here as a 24-year-old rookie with the South Bend Blue Sox in 1946.

There’s no crying in baseball, at least not for Mona Denton. She is not in a league of her own, but she is pretty darnn close. Denton is one of a very small handful of Colorado-born players to be memorialized in the National Baseball Hall of Fame at Cooperstown. The only man from Colorado was also a pitcher, Rich “Goose” Gossage, who was born in Colorado Springs in 1951. (Former Rocky Mountain News columnist Tracy Ringolsby received the hall’s J. G. Taylor Spink Award in 2005.)

In 1988, Denton and roughly 600 other players in the All-American Girls Professional Baseball League were added to the National Baseball Hall of Fame in a permanent exhibit, “Women in Baseball.”

At least two women from Colorado played in the league. The other was catcher Lucille “Lou” Colacito, who was featured in a lengthy profile in the Rocky Mountain News in 1992 when the movie “A League of Their Own”came out.  The article called Colacito Colorado’s only female professional baseball player, but the story was appended with a correction the next day mentioning Denton, but it gave no other details of her career. Colacito died in 1998, and  another Rocky story  noted she was an inductee into the Colorado Amateur Softball Association Hall of Fame. In 1993 Colacito she was invited to speak at a symposium on baseball in Cooperstown. Unfortunately and unfairly, neither Denton nor Colacito are among the 216 inductees in the Colorado Sports Hall of Fame for their participation in the major women’s league.

Denton’s winding road to the hall began when she was born in Englewood on New Year’s Day 1922, but it’s doubtful she could have made the journey into baseball history on the strength of her record on the mound. She was saddled with one of the worst records of any hurler who recorded a win in the league’s 12-season run from 1943 to 1954.

For two years, in 1946 and 1947, the right-hander from the Mile High City had one win against 11 losses. The first season Denton made just three appearances and pitched 13 innings, giving up 15 runs against two strikeouts, for the South Bend Blue Sox. The next season, she got into 23 games for the Kenosha Comets, who finished in last place among eight teams with a 43-69 record. Denton gave up 75 runs against 20 strikeouts, and the next season she was out of baseball. Denton batted a career .200 average, better than the .179 and .121 Colacito batted for the Comets in 1944 and 1945.

Denton died 17 years ago, as privately as she lived after her pro baseball career ended. Other than the correction in the Rocky Mountain News 20 years ago, the only published account of Denton’s baseball career was her obituary that was published in The Denver Post on Sept. 13, 1995. It was short and included information that conflicts with the league’s records: “Mona Denton of Denver, a retired nurse’s aide, died Sept. 2, 1995 She was 73. There was cremation. She was born Jan. 1, 1922, in Englewood. A pitcher for the South Bend Blue Sox from 1944 to 1946, she is a member of the Women’s Baseball Hall of Fame.”

Public records show her home was in the 1800 block of South Newton Street in Denver, still a modest house today that sold for $135,000 earlier this year. Efforts to reach possible relatives the past two weeks turned up dead ends and unreturned phone calls, and neighbors on her street did not remember her last week. What a pity.

The All-American Girls Professional Baseball League was the idea of chewing gum magnate and Chicago Cubs owner Phil Wrigley in 1942, as men were going off to fight World War II, filling a void for sports entertainment in minor league baseball markets. Scouts invited outstanding softball players from across the country to the first spring training at Wrigley Field in Chicago on May 17. 1943. The pay and chance to see the country were attractive, at a time when the average income for men nationally was $48 a week, but much less in some parts of the country, while such opportunities for women were few. Many, if not most, women of the day earned the minimum wage of $12 a week.

“In many cases they were making more than their parents who had skilled occupations,” according to the league’s official history. “Salaries ranged from $45 to $85 a week plus. Those who were signed not only had to be highly skilled players, they also had to comply with high moral standards and rules of conduct imposed by the League.”