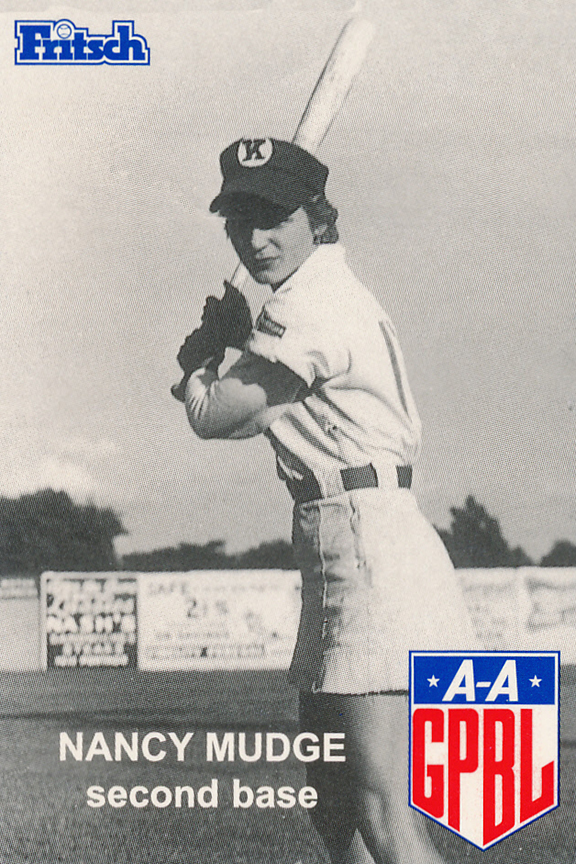 Cato, Nancy Elizabeth “Mudge” died peacefully in her home on July 24, 2012, surrounded by her loved ones.

Nancy was born in Syracuse, New York on October 3, 1929 to Baden & Marion Mudge.  She graduated from Taylor University in Indiana in 1951 with a degree in Education.  She was recruited from college at the age of twenty to play for the AAGPBL  (All American Girls Professional Baseball League) in Fort Wayne, IN. She remained with the league until 1954 and was a member of the Kalamazoo Lassies, the last team to win the league championship. Nancy taught at Hillside College in Michigan before coming to the University of Minnesota, where she taught physical education, until she retired in 1983. Nancy was very involved in her church (Gateway, formerly Elk River Christian Missionary Alliance) and the Network for Life.  Nancy loved participating in and watching all sports and was a guest speaker at many events regarding women’s athletics.

She was preceded in death by her parents, her great-granddaughter Annabelle Lea Scheel, her son-in-law John Purmort and her nephew Baden Paul Mudge of Florida.

Farewell to a diamond belle

When the movie “A League of Their Own” came out in 1992, Nancy Cato of Elk River suddenly had something interesting to talk about with her daughter and grandkids, along with many groups who invited her to speak.

Cato, who died Tuesday at age 82, was one of the real-life ballplayers depicted in the hit film about the women’s professional baseball league that sprang up during World War II and lasted until 1954. She played in the last five years of the league, a total of 388 games.

“It’s something she had never talked about, before the movie came out. I don’t know why,” said her daughter.  “She was totally thrilled about the movie, for the recognition it gave to women’s sports. We talked about it a lot after that. We liked to kid her that she was the one Madonna was playing.”

Cato, a retired college physical education teacher by then, made several speaking engagements, too, to groups who enjoyed the movie and wanted a first-person account.

Archives of the All-American Girls Professional Baseball League show that Nancy Mudge (her maiden name) was a second baseman with Chicago, Springfield, and the Michigan cities of Kalamazoo, Battle Creek, Muskegon and Kalamazoo again from 1950 to 1954, when she was 20 to 24 years old.

Raised in upstate New York, Nancy Cato was a college student when she attended tryouts in Fort Wayne, Ind., and was signed at the time.

“My mother was a tomboy growing up, and when her older brother’s team needed someone she would fill in,” said her daughter. “Evidently somebody had seen her play and recommended her.”

She compiled a career batting average of .200, stole a lot of bases (39 one year) and managed to hit seven homers her final season after just one homer in her first four years.

Cato remained active in tennis, racquetball and slow-pitch softball. She had a tennis court in the back yard.

“Even in her 70s she could still beat all of us until she got Alzheimer’s,” said Purmort, who took after her mom as an athlete in track, volleyball and softball.

Nancy's daughter said her mother greatly enjoyed the movie — starring Geena Davis, Tom Hanks, Madonna and Rosie O’Donnell — except for a few aspects that were not accurate, mainly the heavy drinking of the manager (played by Hanks) along with the scene where the ladies snuck out and got plastered. “They (the league) were very strict,” Cato had said.

Her daughter reported that her mother had a chance to participate in the production of the movie but turned it down:  “Penny Marshall (the director) made a personal phone call to her to ask her, but Mom declined … I think she might have regretted that later.”

Her mother’s reluctance was strikingly similar to the opening scene of the movie, in which Dottie, the slugging catcher in the story, was a grandmother and had no interest in accepting an invitation to an AAGPBL reunion, but her daughter practically shoved her out the door. “You’re GOING!,” the daughter commented.

The Dottie character did make the trip, by bus, and was glad that she did, breaking into a big smile once she arrived and saw dozens of her former teammates and rivals.

That scene was created in real life by Penny Marshall, as she filmed a reunion of the players and tacked it on to the end of the movie. Happily, Nancy Cato did accept the second invitation. She was one of the ladies seen happily throwing the ball around, taking a few swings, and reminiscing with old friends who shared a truly unique experience