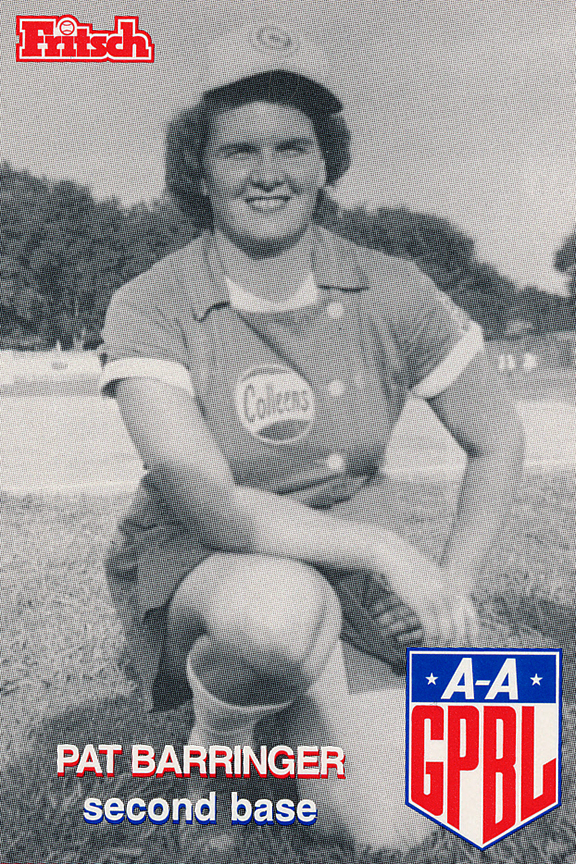 After a year at second base for the Lassies in 1947, Pat agreed to manage and chaperone the Colleens Rookie Touring Team in 1948, 1949 and 1950. They toured all over the United States and Canada playing exhibition games with the Sallies to promote and recruit women playing baseball to support the League.

Pat's fondest memory of those "glory days" was an exhibition game by the touring Colleens and Sallies in Yankee Stadium before a Yankees vs. Philadelphia Athletics' game in August 1950.  She was managing the Colleens and the legendary Connie Mack, the Athletics' manager, sat in the dugout with her.

After retiring from baseball, Pat spent thirty years in the financial field as an auditor and  tax accountant.  She  resided in Port Charlotte, FL for the last 20 years of her life.

More than a half-century before Lisa Leslie or Mia Hamm made "girl power" chic in the sporting world, the All-American Girls Professional Baseball League did the same, much later to be immortalized by the film, "A League of Their Own."

A link to that era of the past died Saturday March 31, 2007 as former player and manager Patricia Barringer passed away at 82 after suffering complications from a fall.

"They were unique women for their time," said her niece, Cheralyn Baudry. "They were athletes when (female) athletes were not recognized. But they paved the way for later woman athletes.

Barringer had lived in Port Charlotte for nearly 20 years after moving here from Portage, Mich., in the late 1980s.

"Both Pat and Bobbie were very experienced in baseball, and they were always there when the ballplayers needed help," said former AAGPBL player Patricia Brown in her memoir "A League of My Own." "And believe me, we would certainly need help as the tour was about to begin."

On one of the Colleens' tours, Barringer even managed the team at an exhibition at Yankee Stadium, where she sat next to legendary Philadelphia Athletics manager Connie Mack. The Colleens toured all over the United States, as well as Canada and Mexico.

"She had a wonderful little suitcase with stickers from everywhere they played," goddaughter Patty Keller said. "(The stickers) represented the cities and teams they had played."

As a chaperone, Barringer was responsible for the players to uphold a strict code of conduct, including approval of all living quarters and eating establishments. Her role as chaperone even required Barringer to approve any of the players' "social engagements."

Still, though she enjoyed reliving her days with the Lassies and Colleens, she didn't wear her baseball career on her sleeve.

"If you didn't hear it, it wouldn't come up necessarily," Baudry said.

But she donated her old uniforms and memorabilia to the Baseball Hall of Fame in Cooperstown, N.Y.

Keller said many of the stories of the old All-American league are exaggerated. But Barringer's passing leaves one less person to say whether they are or not.

Niece Cheralyn Baudry referred to Barringer's baseball career as "a thread in her life" -- one that was certainly revitalized by the 1992 movie starring Tom Hanks, Geena Davis and Madonna.

Baudry said many of the players all kept in touch as they moved on to different things.

"They stayed friends over the years," she said. "They lived independent full lives after their baseball years."

A natural athlete, Barringer once held a national AAU swimming record (and trained under former Olympian Johnny Weismuller), and later enjoyed waterskiing, snowmobiling and bowling. After seeing out her baseball career, Barringer was a tax accountant for 30 years.

Barringer is survived by her brother.

No formal services were planned for Barringer.