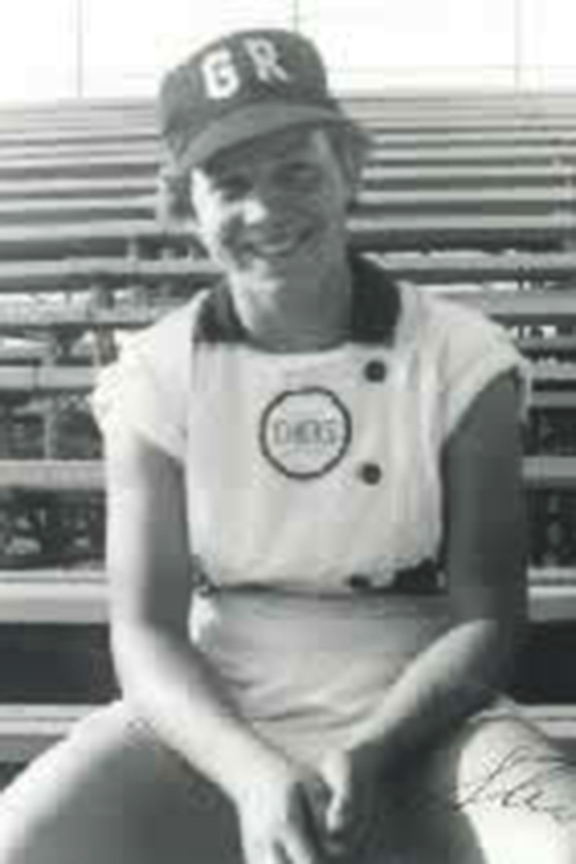 Hear about Rosemary's experience in her own words through the Grand Valley State Oral history project.

"Stevie," came to Grand Rapids to join the "Chicks" in 1954, the final year of the League.  It was a difficult year as the League was showing signs of dissolving, and was now reduced to only 5 teams.

"Stevie" has some precious moments to remember from her experiences in 1954 which she proudly recalls.  One was a grand slam home run into the center field stands. On defense, in the outfield, she recalls robbing All-Star Ft. Wayne hitter, Jo Weaver, of a deep hit to the fence for the final out.

"Stevie" went on to play and coach softball after the League folded.

So, at seventeen, and with my parents support, I traveled to Battle Creek, Michigan in May of 1954 with my softball coach, Jack La Pointe to tryout for the AAGPBL. Jack was a gem of a coach. He was a full blooded Chippewa Indian who had gone to school with the great Jim Thorpe.

106 girls attended the tryouts run by the Fort Wayne Daisies. There were scouts and managers present representing all the teams. They made us throw, catch, run, hit, and slide for three days. On Sunday they posted the names of six gals who had made the cut and I was one of them! My coach later told me that the long fly ball catch and one hop throw to home plate from center field got me the contract. I went back home to finish my last two weeks of school at Pickford High School. The principal at Pickford, Web Morrison was also the coach of the boys' baseball team. He encouraged me to practice baseball with the team everyday until I returned to my assignment in the outfield for the Grand Rapid Chicks.

Later in 1992, Web was the same gentleman who recommended me for recognition by the Upper Peninsula Sports Hall of Fame in Michigan. I graduated on a Thursday evening, packed my bags and left Friday morning for Grand Rapids with Mom and Coach La Pointe and played my first professional baseball game on Saturday. I was a very serious ballplayer who followed the rules. I wanted to play and had learned my lesson at tryouts when a gifted ball player from Milwaukee was caught smoking on the balcony at night and was sent home the next morning!

After playing ball that year the league folded. I went home that winter to different jobs and returned to Grand Rapids in the spring. I did factory work with the Keeler Brass Company and also found a softball team to play on. The gals told me they were hiring at Michigan Bell but I didn't want to be a telephone switch operator so I applied for inside work. My years of hard work on the family farm had prepared me well. I began as a switch room helper and soon became a switchman at a time when women didn't work in these jobs. I stayed with the phone company for 34 and 1/2 years. The last seventeen years I was in supervision as a chief switchman and finally switching supervisor. I retired in December 1989.

I went back to college and earned a degree in religion. I was hired at Michigan Catholic Central and taught religion for 1 and 1/2 years and then changed to a supervisory capacity over maintenance, custodial and transportation duties. I retired for a second time in 1999.

Today I'm active at St. Michael's church in Coopersville. As coordinator of the Right of Christian Initiation of Adults (RCIA), I help new members to the church with their faith journey toward Baptism, Confirmation and Communion. I also assist with the ministry training and work with the different councils. My cousin was a Dominican Sister and was always denied requests to visit with her family so when I told my parents I wanted to be a nun they said no because they didn't want me to be away forever. I also thought I wanted to be a Marine but my parents told me no and then the opportunity to play ball came along.

Today I speak at colleges and schools promoting the history of the league with my friend Doris "Cookie" Cook who lives in Muskegon. People are so interested in talking about the league and often ask me why they didn't know about the league until the after the movie came out. I tell them it never seemed to come up and when it did they didn't believe it was baseball, they think it was softball! I tell them I love softball and I have played it for 52 years as a player and a coach. But I also played professional baseball for one year.

I encourage the girls and boys to follow their dreams whether it is an athlete, fishing boat captain or whatever their dream is! I believe most happenings in life are God directed and I look at all life as a gift.

Rosemary Stevenson of Nunica, MI. was received into the arms of Jesus on Tuesday, January 3, 2017. She played for the Grand Rapids Chicks in the women's professional league that was featured in the movie "A League of Their Own". At a time when women had limited opportunities in professional sports, Rosemary never ceased to believe they could achieve their athletic goals. [Along with her league mates, she was recognized by the Baseball Hall of Fame in Cooperstown, N.Y. in 1988] and the Upper Michigan Sports Hall of Fame in 1990. She played and coached softball for 51 years all around the Grand Rapids, Zeeland, Muskegon, and Upper Michigan areas.

She coached Little League and Pony League boys baseball for four years. Rosemary also was sports coordinator for the Caledonia-Kettle Lake area Youth, Every Woman's Place/Webster House, and the Grand Rapids Girls Rocket softball. She encouraged girls and boys alike to dream big and work hard to achieve their goals!

Rosemary loved her Lord, her life, and her family and friends. She reached out and touched many hearts and lives through her work and active involvements. She was a graduate of Pickford High School and Aquinas College. She retired from Michigan Bell Telephone Co. after 34 years and also had worked for the Greater Muskegon Catholic Schools for five years. She was a member of the Michigan Bell Pioneers, a member of St. Michael's Catholic Church in Coopersville and a past member of Holy Family Catholic Church in Caledonia. She was active in many Catholic organizations, was a Bible and CCD teacher. She also served on many church commissions, was a Stephens minister, Dominican associate, a Communicant, and Cursillist. She had also served on many township board committees.

She was born July 2, 1936 in Stalwart, MI. to Samie and Anna Stevenson. She is survived by two sisters, three brothers, and a brother-in-law. She is also survived by her special friend, a foster son, his son, and several nieces, nephews, and friends. She was preceded in death by a sister, a brother, and a sister-in-law.

A Mass of Christian Burial was held at 11:00 a.m. Friday, January 6, 2017 at St. Michaels Catholic Church in Coopersville with Rev. Father Ayub Francis Nasar as celebrant. Visitation was held Thursday, January 5, from 4-6 p.m. at the Sytsema Funeral and Cremation Services, Spring Lake Chapel, where a scripture service was held at 4:30 p.m. Interment was in St. Stanislaus Kostka Cemetery in Goetzville, MI. Memorial contributions in memory of Rosemary may be given to Friends of the Orphans, or Grand Rapids Dominicans, or St. Stanislaus Kostka Catholic Church.