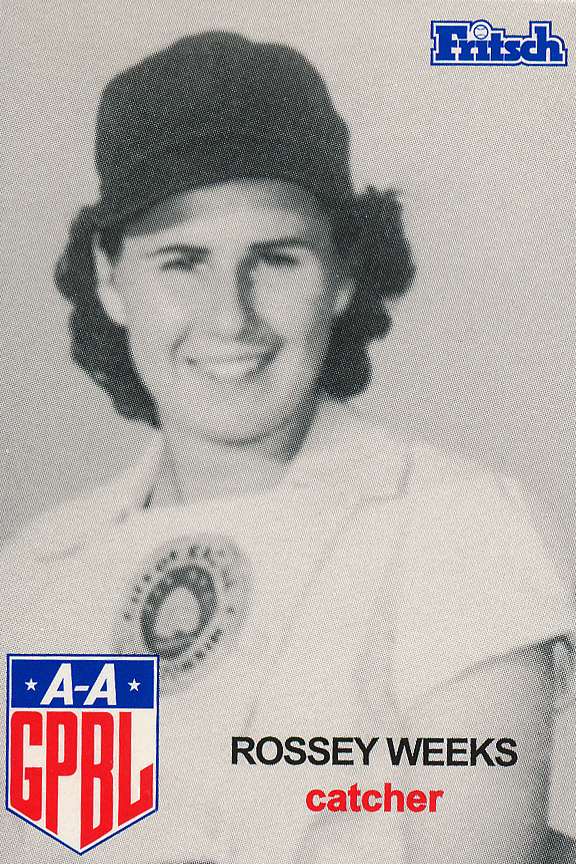 Rossey Weeks was in the military service in the Army Air Corps during World War II.  While stationed in Tampa, she played on service teams in softball, basketball, volleyball, and track. Shortly after her discharge in 1946, she learned of the All-American Girls Professional Baseball League.

Rossey was scouted by Max Carey and traveled to Miami for a tryout.  She went to spring training with the Racine team in Havana, Cuba. She was traded to Rockford shortly after the season started. Her contract called for her to be paid $55 a week, good money in those days. An injury in 1947 cut her career in the AAGPBL short

In a 1988 interview, Miss Weeks said the league had strict rules for player conduct and appearance. Excessive makeup was forbidden as was fraternizing with fans or other team members on game days. While all the team managers were male, each team had a female chaperone to keep a close eye on the players, especially on road trips.

After her professional career ended, Miss Weeks returned to Jacksonville and played on local softball and basketball teams. She had quite a reputation as a top softball player and was a member of the 1955 Gator Gals team that won the state championship. She continued playing until 1966.

When she learned in 1988 that her name would be enshrined in Cooperstown along with all the other All-Americans, she said, "I was strutting like a peacock the day I found out. It's just fantastic."

Miss Weeks worked for the city for 20 years and then was a computer operator at Jacksonville Naval Air Station where she retired in 1992.

Rossey Louise Weeks, 79, passed away  April 13, 2005. Born September  7, 1925 to Ross and Della Durham Weeks, Rossey graduated from Robert E. Lee High School and served in the U.S. Army Air Force. She also played women's professional baseball for the Rockford (IL) Peaches and the Racine (WI) Belles. She worked for 20 years for the City of Jacksonville and as a computer operator at NAS Jacksonville, where she retired in 1992. She was a member of Trinity United Methodist Church. She is survived by one sister, and several nieces and nephews.