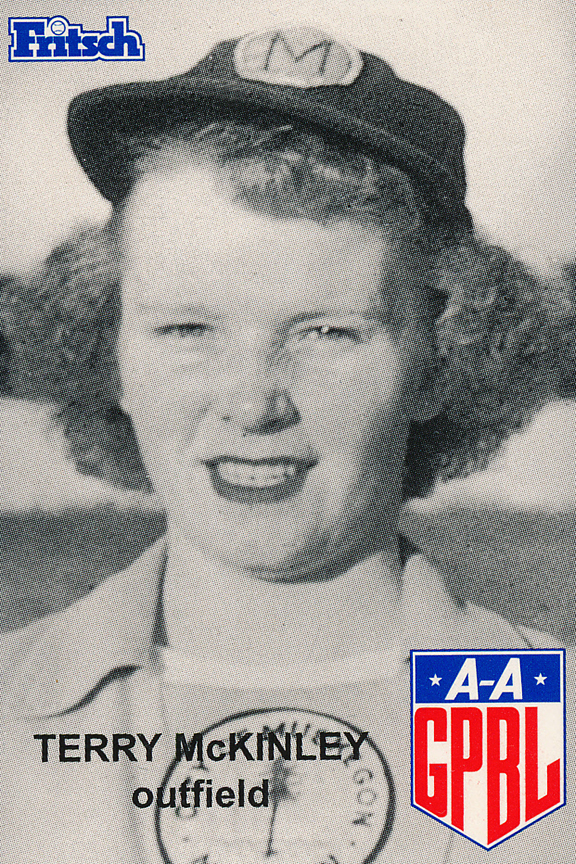 Therese “Terry” Uselmann passed away peacefully at her home in Des Plaines, Illinois on May 26th, 2021 at age 93. Terry was born in her family’s home in Chicago on February 28th, 1928 to John and Lucy (Shallcross) McKinley. Terry and her two beloved brothers, John and Edward McKinley remained close their entire lives.

Terry was always an athlete and competitor. She began playing 14-inch softball in the Chicago Park District at age nine. She later attended Notre Dame High School in Chicago, where she played intramural basketball and volleyball. Terry played softball for six years in the leagues and one year in an industrial league for men. She attended every single game when the Chicago Cubs played in the 1945 World Series, even if this meant getting in trouble for skipping school.

In 1948, when she was 20, Terry read an advertisement in the Chicago Tribune and attended a tryout with the All American Girls Professional Baseball League (AAGPBL). She made the grade, and in 1949, Terry joined the league and was assigned to Muskegon as a member of the Muskegon Lassies. As a result of her time with the AAGPBL Terry is a member of the Baseball Hall of Fame in Cooperstown, NY.

After a successful season and appearing in all five playoff games with the Muskegon Lassies, Terry returned home and played more softball before joining the United States Navy during the Korean War. During her time in the Navy, Terry was stationed in Miami and travelled to Cuba. Afterwards, she enrolled at DePaul University and earned her Bachelor of Science degree in 1958 and eventually her Master of Arts degree in 1963. After obtaining a bachelor’s degree, Terry began working for the Chicago Board of Education. She first worked as a playground teacher and eventually took a job as a PE teacher at Marshall High School. It was here that she met her late husband, Duane Uselmann.

Duane and Terry married on Thanksgiving Day of 1960 and her five beautiful children included four girls and a boy. Terry’s family was her pride and joy. She was a dedicated mother and grandmother to her ten grandchildren.

Terry was an incredible friend and never hesitated to help those in need. She was a trusted caretaker for multiple family members and friends during her lifetime, including her late brother Edward McKinley after he was wounded in the Vietnam War, her close friend Jeanmarie Sweeney, and eventually her late husband Duane during his battle with cancer and MS.

When her kids were in high school, Terry worked as a PE teacher and eventually Athletic Director at St. Louise de Marillac high school. Over the years, Terry also served as a leader on the School Board and in the Catholic Women’s Club at Our Lady of Ransom parish. After retiring from teaching, Terry stayed active babysitting her grandchildren, participating in the Senior Olympics where she won medals for her killer ping pong skills, volunteering at church or her brother Eddy’s nursing home. She also worked as an usher at the Allstate Arena for over 20 years while also working as a starter at the Glenview Golf Course until 2019. Terry stayed sharp as ever, and busy until the very end including participating in her weekly bowling league.

We will forever miss the love, loyalty, and friendship that she shared so many. We love you, Terry. Safe home.