Lefty pitched 42 consecutive scoreless innings with Kenosha in 1948. She is also famous for having a hit against Satchel Paige in an All-Star game. 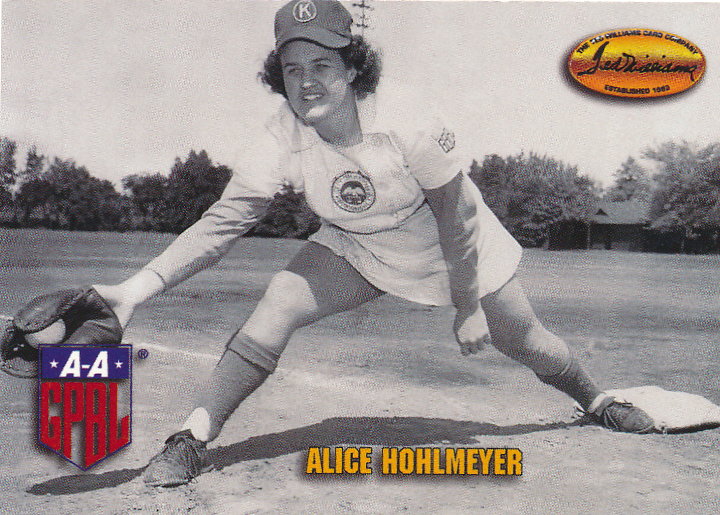 Lefty pitched 42 consecutive scoreless innings with Kenosha in 1948. She is also famous for having a hit against Satchel Paige in an All-Star game.

By Lefty pitched 42 consecutive scoreless innings with Kenosha in 1948. She is also famous for having a hit against Satchel Paige in an All-Star game.

Lefty played first base for the Comets with a good arm. She graduated from Ohio State in Physical Education. She played basketball and field hockey. Alice also had a hobby of singing and writing songs.

Alice “Lefty” Mc Naughton was one of the legendary women who played professional baseball in the 1940s and 50s, keeping the sport alive while the men were at war.

The third of three kids, Mrs. Mc Naughton loved baseball from a young age, showing interest as young as 5.

“They’d send her out to right field and have her shag balls in, and pretty soon she could throw harder than the boys," said her son Sean Mc Naughton.

In the All-American Girls Professional Baseball League, the women were expected to play like men and act like ladies.

Over time they became local heroes, filling a void and providing a distraction from wartime. They were called “the queens of swat” and the “belles of the ballgame” by sports announcers.

The league was popularized by the 1992 Hollywood film "A League of Their Own.” The character played by Rosie O'Donnell was loosely based on “Lefty,” something she liked to tell her friends.

Born Alice Hohlmayer on January 19, 1925, in Springfield, Ohio, she was the daughter of Carl Hohlmayer, a milkman and laundromat owner, and Marguerite Hohlmayer, a housewife.

She graduated from Springfield High School in 1942 and then attended Ohio State University, where she played nine sports including softball, basketball, field hockey, tennis and volleyball.

At the time when so many men were leaving to fight overseas during WWII, there was a fear that professional baseball might come to a halt without enough fans to keep the ballparks open.

Philip Knight Wrigley, also known as “the chewing gum king” and owner of the Chicago Cubs franchise, stepped up to save America’s favorite pastime with a women’s baseball league.

The best female softball players in the U.S. and Canada were scouted. That included Alice Hohlmayer, at age 20.

She was discovered in 1945 while playing during a tournament in Cleveland.

She tried out and entered the league in 1946 with the Kenosha Comets, playing for them three years before joining the Muskegon Lassies (1949), Kalamazoo Lassies (1950) and Peoria Redwings (1950–1951).

She started at first base, then gradually became a full-time pitcher, batting and pitching left-handed.

Louis Lurie, a now retired Chula Vista orthopedic surgeon, met “Lefty" about 25 years ago, and over the years, they became friends.

Lurie said she had a “wise-guy" type of personality.

“She always had a funny joke,” he said. “We loved to talk about all the old-time players, the men and their batting averages, trivia type stuff.”

Mrs. McNaughton gained notoriety for being the only woman to hit against legendary pitcher Satchel Paige during an All-Star exhibition game in 1947. She was also a pretty good pitcher, with 42 consecutive scoreless innings in 1948, according to stats on her baseball card.

She continued studying at Ohio State while playing ball and graduated in 1949 with bachelor's degrees in physical education and health.

After the 1951 season, she went back home to help her father with the family laundromat business.

She married William McNaughton, who died from a heart attack while overseas serving in the U.S. Air Force in 1960.
She went on to raise not only her son and a daught, but also the two adolescent girls of a neighbor.

Mrs. McNaughton taught school and worked for 26 years in the local finance department and recreation services for the city of Fairfield, Calif., while coaching Little League Baseball in her spare time.

After retiring in 1979, she played on a men's 55-plus softball team which she also managed, and the team advanced to the championship in Las Vegas.

Sean McNaughton, 58, described his mom as "a joyful person” who enjoyed passing on what she'd learned.

“When I was 9 years old she became my baseball coach and we won every game — 17-straight,” he said.

Mrs. McNaughton made many appearances around the country, where she signed autographs and talked to kids at schools about baseball.

In 1988, she became part of Women in Baseball, a permanent display at the Baseball Hall of Fame and Museum in Cooperstown, N.Y. It honors the entire All-American Girls Professional Baseball League, which ran 12 seasons before ending in 1954.

A public tribute to “Lefty” is expected to be held later this month at Petco Park.

In addition to her son and daughter, she is survived by two foster daughters, a grandson, and a great-grandson.