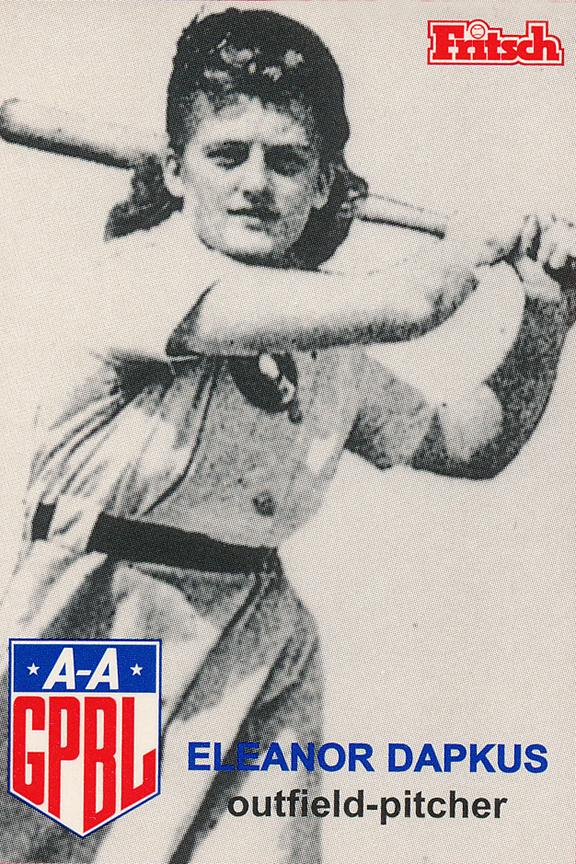 Eleanor won the cheers and approval of the Racine fans at the start of the 1943 season because of her potent work at the plate and her ability to break up the game with a long ball.She hit 10 home runs in1943 to led the league and over a six season span she hit more homeruns then any other player in the AAGPBL. Eleanor not only did a fine job on the mound but she also was a solid outfielder. A well rounded athlete who participated in bowling, skating, table tennis and volleyball. She worked in a machine shop during the war.

ELEANOR V. WOLF (NEE DAPKUS) ST. JOHN, IN Eleanor V. Wolf (nee Dapkus) of St. John, IN passed away Monday, June 6, 2011 at her home after a long and courageous battle with breast cancer. She was born on December 5, 1923 to Frank and Antonina Dapkus in Chicago, IL. Eleanor is survived by her son, Richard (Marlene "Suzi") Wolf of St. John; granddaughters: Laura and Rachel; grandsons: Frank Jr. and Gregory, the Ippolito family, Bryan and Renea Bergez; and numerous nieces and nephews. Preceded in death by her parents; son, Frank; brothers: Frank, Leo, Julius, John, Michael, Bouley, Bruno, Edward, and Steven; and sister, Sophie. Funeral services [were] held Friday, June 10, 2011 at 10:00 a.m. directly at St. Timothy's Episcopal Church, 1115 N. Cline Ave., Griffith, IN with Rev. Steven Schuneman officiating. At rest Chapel Lawn Memorial Gardens, Schererville. Friends [were] invited to visit with Eleanor's family on Thursday from 2:00-8:00 p.m. at the Lincoln Ridge Funeral Home, 7607 W. Lincoln Highway (Rt. 30 east of Cline Ave.), Schererville. During WWII while working at the Pullman Aircraft Factory, painting airplane parts, Eleanor was recruited by Phillip K. Wrigley to play for the All-American Girl's Professional Baseball League and played professional baseball for the Racine Belles from 1943 to 1950 earning the nickname "Slugger" for her powerful hitting abilities, helping Racine clinch the league championships both in 1943 and 1946. She was chosen for the 1943 All Star team that played the first night game at Wrigley Field on July 1, 1943. Eleanor was a two time league and playoff champion (1943 and 1946), all star team (1943), single season leader in home runs (1943), ranked 7th in lifetime home runs and 10th in RBI's and was inducted to the Cooperstown, Canadian, and Manitoba Baseball Halls of Fame. Over the years, she also earned over 25 medals in several sports including softball, volleyball, basketball, and soccer.