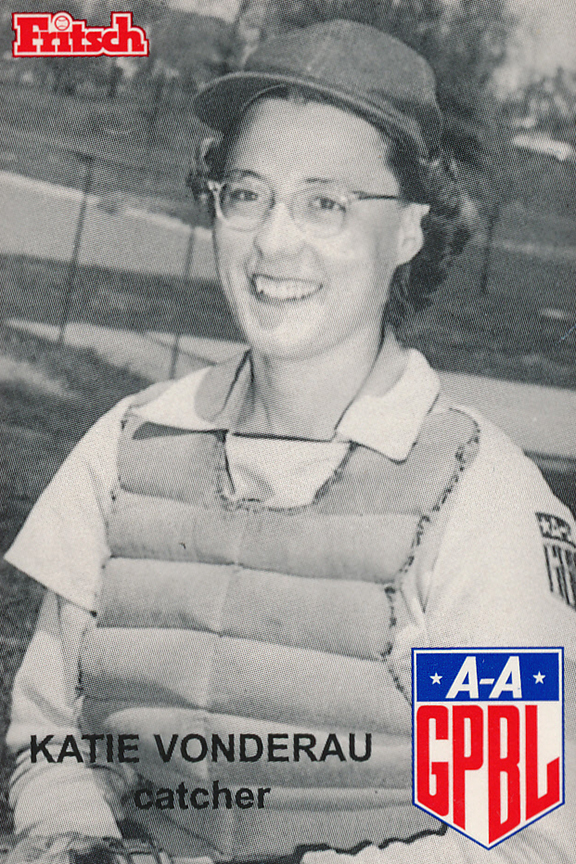 Hear about Kate's experience in her own words through the Grand Valley State Oral history project.

In 1944 and 1945, Katie's softball team, Bob Inn, won two Indiana state titles.  Katie spent the next eight years (1946-1953) in the All-American Girls Professional Baseball League behind the plate for various teams. Katie was a hard-working catcher with a quick release and a sure glove that paid off for her in the 1952 season when her Ft. Wayne Daisies won the League Championship.  In the off-season, besides competing in bowling and playing basketball, the business college graduate served as an auditor for an Insurance company and as a bank teller.

After her playing days, Katie went on to receive B.S. and M.S. degrees in Physical Education from Indiana University and a Ph.D. from the University of Iowa.  Katie taught elementary, junior high, and high school physical education for nine years.  As Dr. Vonderau, she served as a full professor and chair of the Department of Health, Physical Education, and Recreation at the University of Wisconsin-Whitewater for 22 years.

Dr. Vonderau was inducted into the UW-Whitewater Athletic Hall of Fame in 1996.  In 2003, the University dedicated a permanent display case honoring her years in the All-American Girls Professional Baseball League.

Kathryn “Kate” Vonderau was born September 26, 1927 to Carl and Emma Vonderau of Fort Wayne, Indiana. She joined her two older brothers, Kenneth and Ramond. The family lived in south Fort Wayne. Kate was baptized as a member of Zion Lutheran Church. She attended Zion Lutheran Elementary School and graduated from South Side High School in 1945.

While in high school, Kate played for several local softball teams. One of the teams she played for was sponsored by a local restaurant. The owner of the restaurant was also a scout for professional baseball and recommended Kate try out for the Fort Wayne Daisies. At his urging, she tried out and was accepted into the American Girls Base Ball League (as it was known then) where she became a catcher playing for the Fort Wayne Daisies. She signed her first professional contract at the age of nineteen. She played eight seasons for several different teams. She, along with her league mates, was honored by the National Baseball Hall of Fame in Cooperstown in 1988 as a member of the AAGPBL.

Kate bought a lake house in upstate Indiana where she loved to water ski and fish. Family and friends enjoyed many summers there at her special retreat. Kate retired in 1988 and moved to Albuquerque, New Mexico where she enjoyed the warmer climate. She was an active member of Christ Lutheran Church and loved singing hymns. During retirement, Kate enjoyed traveling, spending time with friends, and she was an avid golfer. She played in several golf leagues and formed lasting friendships.

In 2014, health changes prompted her and her Schnauzer, Missy, to leave Albuquerque and move to Washington State to be closer to family.  There she became a member of Immanuel Lutheran Church in Puyallup. She continued to be involved in activities while in senior assisted living homes. Kate loved animals and had several Schnauzers through her lifetime.

Despite her physical challenges of blindness and being wheelchair-bound, she participated in exercise classes, played blackjack, and went to social activities. She loved visiting with friends and maintained phone contact with distant friends. Kate passed away on August 10, 2022. She is survived by nephews Steve and Richard as well as four great nieces and nephews, and five great-great nieces and nephews. We miss her determination and enthusiasm for life. Kate was laid to rest in the family plot in Concordia Gardens in Fort Wayne, Indiana.

After Kate’s retirement from the University of Wisconsin-Whitewater, Dr. Dianne Jones formed the Vonderau/Clark Scholarship Fund in honor of Dr. Kate Vonderau and Dr. M. Corinne “Corky” Clark. Both had served as heads of the Department of Physical Education. In Lieu of flowers, memorials may be sent to the Vonderau/Clark Physical Education Scholarship at the University of Wisconsin-Whitewater.

Copyright: Adapted from Steve Vonderau's draft of the obituary.