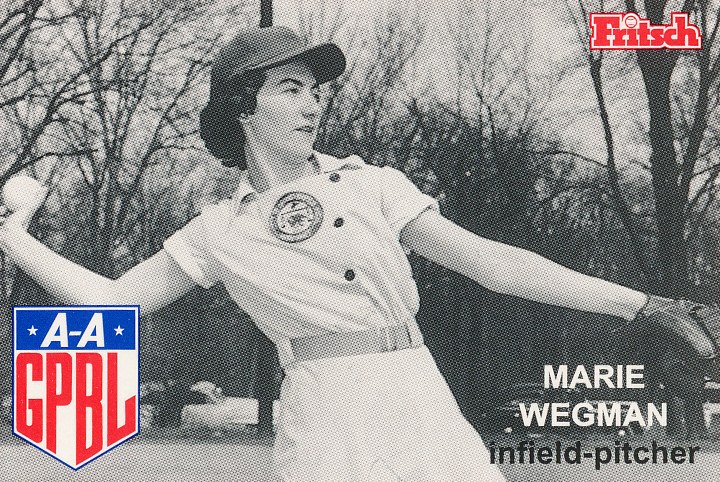 DELHI TOWNSHIP -Back when women had a league of their own, Marie "Blackie" Wegman of Price Hill made the cut on four professional baseball teams.

She pitched or played third base and shortstop for the Rockford Peaches, the Fort Wayne Daisies, the Muskegon Lassies and the Grand Rapids Chicks.

These team names might seem sexist today, but Ms. Wegman and her teammates were pioneers.

They stepped up to the plate during World War II, when professional baseball seemed doomed after the men went off to fight, and continued into the conservative 1950's.

Ms.Wegman, whose father, Clem, taught her softball alongside her five younger brothers, played for the All-American Girls Professional Baseball League from 1947 to 1950.

When she died Tuesday January 20, 2004 of heart failure at Mercy Franciscan Western Hills Campus, she took a piece of women's history with her. Ms. Wegman, a resident of Delhi Township, was 78.

Born in 1925, she was the oldest in a family of seven children. She grew up in Price Hill with the west-side tradition of playing baseball and softball.

After attending Seton High School for three years, she dropped out and took night classes at Western Hills High School. During the day, she ran a lathe in a factory for 35 cents an hour.

Ms.Wegman played for several company softball teams - including that of the Gruen Watch Co. - and made a name for herself as the best female player in the city.

A scout for the All-American Girls league spotted her in a tournament in Cleveland and offered her a contract.

She said no, then returned home and reconsidered after learning that she would train in Cuba and that the pay was $60 a week—more than she could make in a factory.

She "really enjoyed her stay in Cuba," said her niece, Diane Bender of Bright. "What an exciting experience for a young girl from Price Hill."

The first year she played for the Peaches—the team portrayed in the 1992 movie A League of Their Own.

She made 1950 her last season after her father died. She returned to Price Hill, took classes at the University of Cincinnati and became a designer of packaging equipment and machinery. She took a job with the Lodge & Shipley Co. in 1951 and remained there until she retired in 1988.

Ms.Wegman was a member of the Price Hill Historical Society and the All-American Girls Professional Baseball League Players Association.

Survivors included a sister and her four brothers.

A Mass of Christian burial was held at Our Lady of Lourdes Church, and Burial was at St. Joseph (old) Cemetery in Price Hill.