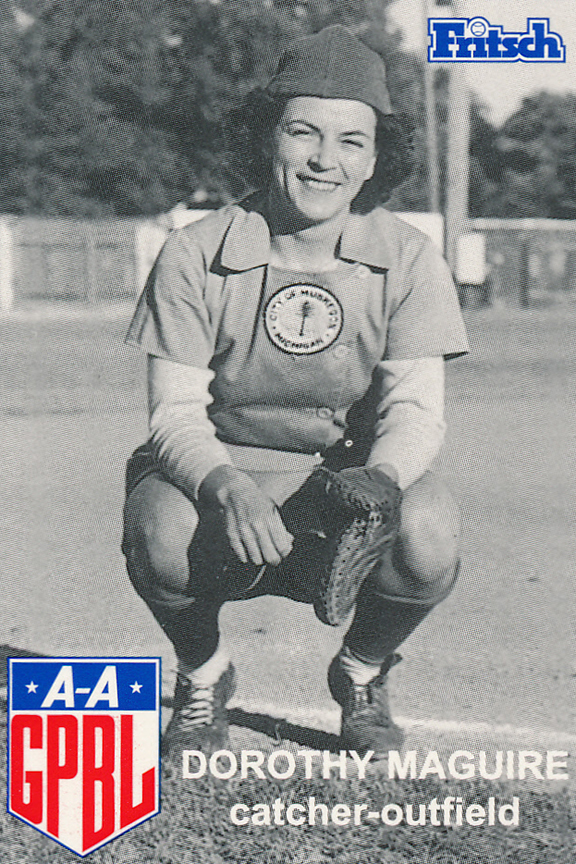 Tom Maguire was reported killed in action when Mom played for the Chicks in June, 1944. Mom's mother called her before a game. Mom played the game and announced to the press after the game about what had happened. She then received a couple of letters from him in August from a hospital in Italy. He was not identified for that time and presumed dead. I have the news articles in a scrapbook about this.

Mom got her nickname in 1945 while with the Chicks. I have an article that identifies her as playing with the tenacity of Mickey Cockrane, catcher for the Detroit Tigers and Hall of Fame member. She was also identified in the paper as being the highest paid catcher in the league. No salary was mentioned though.

Favorite position: Catcher
Favorite Manager: She loved them all, perhaps Max Cary was her most favorite.
Favorite Chaperone: Not sure but I would think Helen Hanna Campbell.

How she learned about the league: She was playing for the Erin Brew fast pitch team in Cleveland, Ohio. They were perennial champions and Mom was scouted and invited to the try outs in 1943.

How she learned to play ball: She played with neighborhood boys. A tool shop in Elyria, Ohio made special arrangements to work around child labor work rules so she could play with them in 1934-36.
Most memorable experience: She had so many, but the spring training trip to Havana, Cuba had to be the most memorable that she talked about.

Special records: None to speak of. She always played hurt and did not want to miss any games. She was a rough and tough catcher who held her ground to anyone who tried to score at home plate. She was one of the older girls in the league and had a lot of pull and influence.

Hobbies included training horses. She had a Champion Morgan Horse, Chico's Flame, that could only be trained and handled by her.

Before coming to the league Mickey played on two World Championship teams in 1936 and 1938 from Cleveland ,Ohio.

One of the original members of the "All American Girls Professional Baseball League"(AAGPBL).

Dorothy learned to play baseball by playing with the neighborhood boys. In 1934-1936, when she was only 16, a tool shop in Elyria Ohio made special arrangements to work around child labor rules so that she could play with them. She went on to play for the "Erin Brew" which was a fast pitch team in Cleveland Ohio. The Erin Brew were the perennial champions and it was there that Dorothy was scouted and invited to the 1943 try outs for the AAGPBL. Of the hundreds of young women from across the nation who went to the try outs... only 280 were invited to the final tryouts and only 60 of those were invited to become the first women to play professional baseball.

Dorothy's position was catcher and in 1943 she played for the "Racine (WI) Belles" who at the end of the season became the first World Champions of the All American Girls Professional Baseball League.

In 1941, Dorothy married Tom Maguire. In June of 1944 she received a call just before a game from her Mother. Tom had been killed in action. Dorothy kept the news her Mother had given her to herself and played the game. It wasn't until after the game that Dorothy reported the news to the press. Then in August, she received a couple of letters from Tom. He had been in a hospital in Italy and had not been identified and was presumed dead. This event was included in the movie "A League of Their Own" and portrayed by Geena Davis.

Dorothy and Tom divorced in 1947 and in 1949 she married George Chapman.

Dorothy got her nickname in 1945 while playing with the Grand Rapids Chicks. She was said to have the tenacity of Mickey Cochrane, catcher for the Detroit Tigers. Hence the name... Dorothy "Mickey" Maguire Chapman. She was also reported to be the highest paid catcher in the league.

Dorothy played in the AAGPBL until June 15, 1949 when she retired.

After retiring, she raised 6 children. She also trained horses as a hobby.

In 2006 a bronze statue honoring the members of the All American Girls Professional Baseball League was unveiled at the Baseball Hall of Fame in Cooperstown, New York. The Statue named "At Bat" was made by Stanley Bleifeld from a picture of Dorothy "Mickey" Maguire Chapman.