Dottie was a slick fielding shortstop and was the only player to play all twelve years of the league. 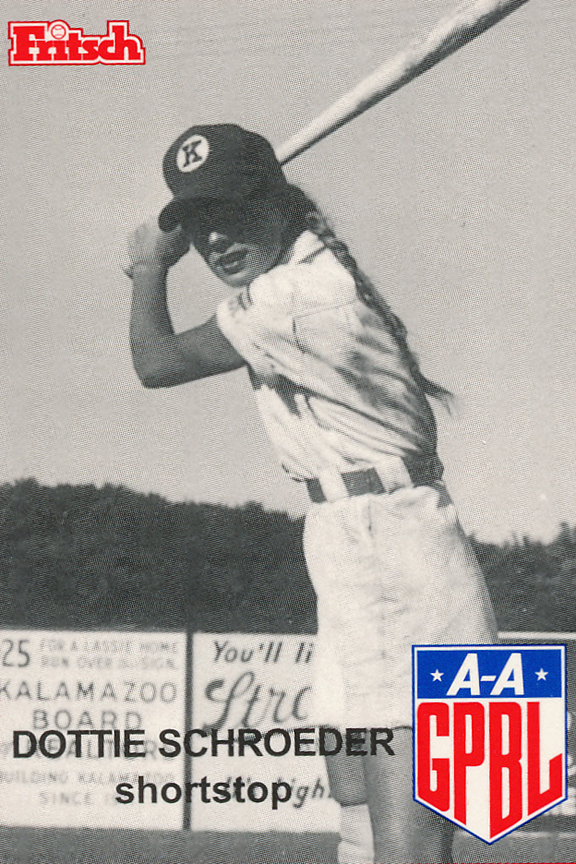 Dottie was a slick fielding shortstop and was the only player to play all twelve years of the league.

By Dottie was a slick fielding shortstop and was the only player to play all twelve years of the league.

Dottie was one of the leagues favorite players. Dottie with her inimitable pig-tails was undoubtedly one of the flashiest fielders operating in the AAGPBL. Her smoothness and grace in fielding ground balls was overshadowed only by her powerful throwing arm. Cubs' manager Charlie Grimm described Dottie as a $50,000 player if she were a boy.

Although league statistics show that her batting average a little lower than the average player, Dottie did a wealth of good at the plate with her long fly balls.Her RBI totals very often were near the top of the league. Schroeder spent the majority of her time with the Daisies while holding down this key shortstop position. She was a mere 14 yrs. old when she started playing in the league. Dottie had a twin brother, Don.

Schroeder, Dorothy "Dottie:" All-American Shortstop
By Jim Sargent
Dorothy "Dottie" Schroeder was the only girl who played all 12 seasons for the All-American Girls Professional Baseball League (AAGPBL). She became a standout performer and a fan favorite for the South Bend Blue Sox, the Kenosha Comets, the Fort Wayne Daisies, and the Kalamazoo Lassies.

When the All-American League, as it was usually called, folded following the 1954 season, Dottie became a regular on manager Bill Allington's touring team of 11 All-Americans. When the lack of finances caused the tour to end after four summers, Schroeder had played a record 15 seasons of professional baseball, a mark no woman will ever equal.

"Dottie was a mainstay of our league," commented Jean Faut Eastman, the two-time Player of the Year (1951, 1953), who pitched for the South Bend Blue Sox from 1946 through 1953. "She had such good hands and such smooth moves, and she could make all the plays at shortstop."

In addition to playing 12 AAGPBL seasons, Schroeder holds all-time records for most games played (1,249) and most at-bats (4,129). She also produced the most RBIs in league history, 431, making her one of only five players to collect over 400 RBIs. A 5'8" 150-pound blonde who wore her hair in two braids, she was pretty, talented, and friendly toward everyone.

Blessed with a genial personality, a positive attitude, excellent hand-eye coordination, and a strong throwing arm, Dottie batted .211 lifetime. A right-handed hitter, her average was respectable, considering that the league used a "dead ball" until mid-1949.

Still, Dottie made the greatest contributions with her smooth glovework and her friendly personality.

Doris Sams, another two-time Player of the Year (1947, 1949) and a teammate of Schroeder's at Kalamazoo, remembered Dottie as an outstanding fielder. "She always played shortstop on her team. She was like a vacuum cleaner with those ground balls, and she could really hit that ball, too.

"Everybody liked Dottie. She was a real pleasure to have as a teammate. She was a lady and a standout ballplayer, through and through."

Born on April 11, 1928, Dottie became the league's youngest player at age fifteen. She grew up with two brothers on the family's farm near Sadorus, Illinois, and she rose to lasting fame in the All-American League.

After succeeding at the tryouts held at Sportsman's Park in St. Louis in 1943 (she competed against 60 women for one of two roster spots), and again at Wrigley Field in Chicago, she began her pro career with the South Bend Blue Sox.

"It never occurred to me that I wouldn't get picked," Schroeder later remarked. "I was so young, the thought never crossed my mind. All I wanted to do was play ball."

Play ball Dottie did--always with graceful style. She anchored the Blue Sox infield from 1943 until she was traded to the Kenosha Comets midway through the `45 season. After two years with Kenosha, she starred for the Fort Wayne Daisies from mid-1947 through 1952. After being traded to Kalamazoo in 1953, she became a leading Lassie.

The ultimate team player, Schroeder's all-around talent made her one of the league's best. In fact, she was one of the few All-Americans pictured individually in the exhibit on Women in Baseball which National Baseball Hall of Fame created in 1988.

"There wasn't a person who played in the league who didn't like Dottie Schroeder," observed Dottie Wiltse Collins, Fort Wayne ace right-hander and now treasurer of the Players Association. "She was very friendly, and very witty, just everybody's All-American. She was an idol to a lot of us."

Schroeder's career included numerous highlights. For example, in 1950 her fielding and hitting, including five homers and 58 RBI, helped lead Fort Wayne to second place during the regular season with a 62-43 record. In the end, the Rockford Peaches won the Championship in the Shaughnessy Playoffs.

In 1952 Dottie's stellar play helped the Daisies win the regular season title with a 67-42 mark. But after an exciting series, Jean Faut's South Bend club won the Shaughnessy Title.

Schroeder continued to inspire teammates and fans. In 1953, playing for her fourth team, she was named "Most Popular Player" by Kalamazoo rooters. In 1954, which was the league's finale, Dottie's .304 season helped the Lassies finish fourth (48-49) and then win the Shaughnessy Championship.

Never married, Dottie lived with her twin brother Don in Champaign, Illinois. After baseball, she worked for 36 years at the Collegiate Cap and Gown Company. They attended St. Paul's Lutheran Church in nearby Sadorus, where she sang in the choir. She passed away suddenly on December 8, 1996.

Replying to a 1993 questionnaire for the AAGPBL Archives at the Northern Indiana Center for History, Schroeder listed her favorite memories: "Winning playoffs in 1954--South and Central American Tour in 1949--spring training in Havana, Cuba [1947]--just simply playing ball in each and every game."

Schroeder probably received more media attention and signed more autographs than any other All-American. An appropriate symbol of the feminine character of a league which wanted girls to look like women but play ball like men, her pretty portrait adorned the cover of Parade Magazine in August 1948.

But fame never turned her head. Even though she enjoyed the 1992 movie, A League of Their Own, Dottie had no desire to relive the highlight of her life. She always gave the diamond game her best effort, and she was satisfied with her performance.

"I couldn't abide anyone not giving their best," the modest hero told writer Becky Mabry in 1992.

"It was nice while it lasted and I wouldn't have missed it for the world," Dottie Schroeder once reflected. "But that's past ... and it'll never come around again."

A shortstop for four teams in the All-American Girls Professional Baseball League (AAGPBL), Dorothy Schroeder was the only girl to play in all 12 seasons of the circuit's existence.

Raised in central Illinois, she manifested athletic talent early, playing fastpitch softball at 11 and proving herself good enough for a college team at 12. In 1943 Dottie tried-out for the AAGPBL and was assigned to the South Bend Blue Sox making her, at 15, the youngest girl in the league.

In her first season she was to be a standout fielder while batting .211, stealing 32 bases, and helping her team to the league title. She was sent to the Kenosha Comets during the 1945 season then to the Ft. Wayne Daisies in 1947, remaining there thru 1952.

Always a defensive superstar, Dottie steadily added to her stolen base totals and saw her hitting improve following the adoption of overhand pitching in 1948; after earning her first All-Star selection in 1952 she gained two more with the Kalamazoo Lassies in 1953 and 1954. Her final year proved to be her best as she hit .304 with 17 home runs, in the process helping the Lassies to the last AAGPBL championship.

Dottie hit .211 over her career and holds the all time marks for games played, at bats, runs-batted-in (431) and walks; her 872 hits rank second while her 42 home runs are good for third place.

After the circuit folded she played on Bill Allington's barnstorming team for three seasons then returned home where she worked at Collegiate Cap & Gown Company for 36 years. She retired in 1993 and died of a cerebral anuerysm on December 8, 1996.   In 1988 Dottie was part of the Baseball Hall of Fame's mass recognition of the AAGPBL and its players and is one of the few to be individually depicted; the league's story is told in the 1992 move "A League of Their Own". (bio by: Bob Hufford)