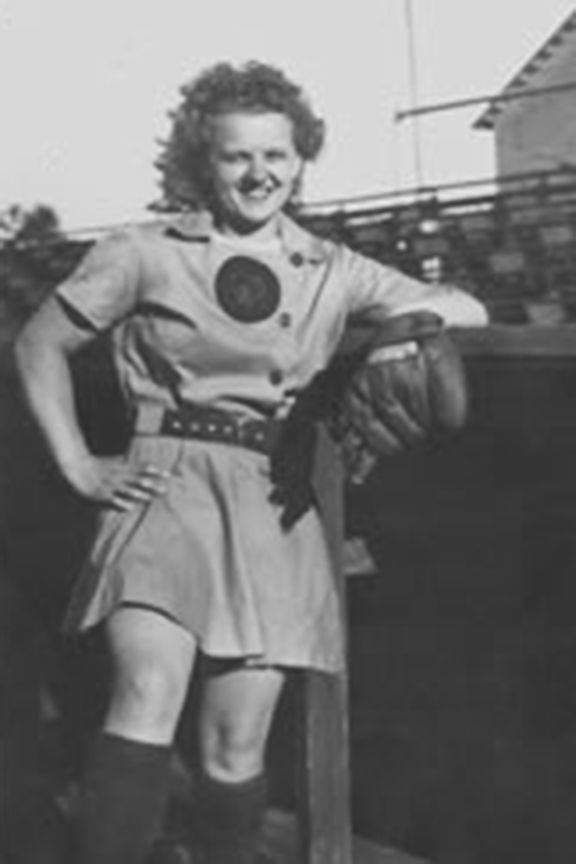 Hear about Helen's experience in her own words through the Grand Valley State Oral history project.

Helen join the Peaches in 1945 and she helped them win the title that year.  She kept scrap books of her playing days and was a photographer on the side. In 1938, Helen started in baseball around the playgrounds of Detroit. She played amateur ball, starting at shortstop, and then second base, and finally settling in at third. Fil played six years in the league. After two years with the Peaches she was trade to Peoria and then moved mid season to Kenosha.  After the 1947 season she was sent to South Bend where she played for three years before she retired to get married to Don Steffes. She had six children, 4 boys and 2 girls. She continued to be active in sports and did so by coaching her children's teams. She enjoyed playing basketball and also bowled. During the war years she worked for the Briggs Aircaft in Detroit on the B-29 wings.  She has coached hundreds of girls, including her two daughters, and continued to coach into the early 2000's. Her players think so highly of her that they all call her Mom.

Athlete. Movie star. Hall of Fame honoree. A woman never afraid to follow her heart and always willing to argue with an umpire. Helen Steffes, of Harper Woods, (MI) joined God’s team on September 13, 2014. Helen loved home-grown tomatoes, babies, and women who knew how to throw a baseball. She hated the Detroit Lions during every losing season, always screaming instructions through the TV at whoever was coaching the Tigers, and would stay up until all hours of the night watching every Red Wings game.

As a devout Catholic and avid sports fan, Helen spent much of her youth writing “I will not play ball with the boys,” hundreds of times on the chalkboard in her Catholic grade school. Despite her parents' wishes, in 1945, she began her professional athletic career with the All-American Girls Professional Baseball League. As a third baseman for the Rockford Peaches, as featured in the movie “A League of Their Own,” Helen won the World Series and played professional baseball until 1950. In 1951, she exchanged the baseball diamond for a diamond ring as she married Donald Steffes. She raised six children, while never revealing her ground-breaking contributions to women’s sports history. In 1988, Helen was honored by the National Baseball hall of Fame in Cooperstown, NY, along with her league mates. She dedicated her life to coaching young women, including her own two daughters, until her coaching career ended in 2010 at the age of 86.

She is survived by a brother, three sons, a daughter, fifteen grandchildren and fourteen great grandchildren; all of whom she could beat in a pick-up game of baseball until she was in her 80’s. She is eternally reunited with her husband and biggest fan, Donald, and is predeceased by two brothers, three sisters, a son, a daughter, and two granddaughters.

Memorials: In lieu of flowers, the family asked that you make a donation to the Police Athletic League to support the Detroit youth who loved sports the way Helen did.