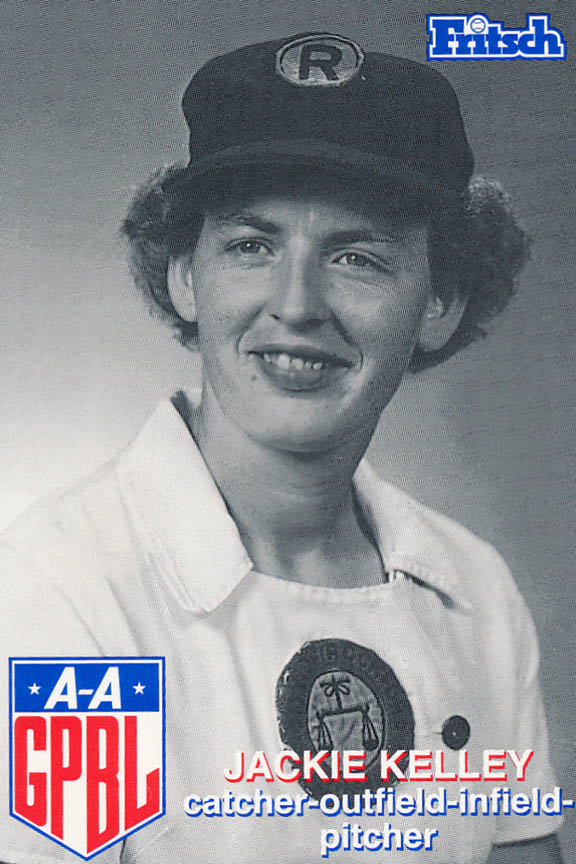 Jackie came from an athletic family, alll four of her brothers were athletes and Jackie's mother was a star basketball player. Jackie enjoyed all sports but she also had a strong interest in flying and photography. Swimming was another sport that Jackie wanted to go pro in and her swimming talent led to saving two people from drowning. Jackie joined the Marines after the League folded. she met her husband in the service.

Jacquelyn Kelley Savage was a utility infielder/outfielder and pitcher who played from 1947 through 1953 in the All-American Girls Professional Baseball League. Listed at 5 ft 7 in (1.70 m), 140 lb., she batted and threw right-handed.

Born in Lansing, Michigan, Jackie Kelley grew up in a household devoted to athletic activity. Notably, all four of her brothers were athletes and her mother was a star basketball player, while Jackie was a talented swimmer in pursuit of a professional career. On one occasion, her swimming skills led to saving two people from drowning. She also enjoyed all sports, particularly baseball, and had a strong interest in flying and photography.

Kelley was a versatile and dependable performer during her seven years in the All-American Girls Professional Baseball League, being able to play infield, outfield, and pitch with a strong level of consistency. "Scrounge", or "Babe", as Kelley was usually called, was spotted by an AAGPBL scout while she was playing in her hometown. She attended the 1947 AAGPBL spring training held in Havana, Cuba, and made the trip along with her fellow neighbor and long time friend Alice Pollitt. Kelley was allocated to the South Bend Blue Sox, while Pollitt joined the Rockford Peaches. Following her rookie season in 1947, Kelley was part of the expansion Chicago Colleens in 1948. She opened 1949 with the Peoria Redwings, but rejoined Pollitt on the Peaches in a moment of the season when the league shifted players as needed to help teams stay afloat. She played with the Peaches through 1953, her last year in the league.

After her baseball career was over, Kelley joined the United States Marine Corps and met her husband. Since 1988 she is part of Women in Baseball, a permanent display based at the Baseball Hall of Fame and Museum in Cooperstown, New York, which was unveiled to honor the entire All-American Girls Professional Baseball League rather than individual baseball personalities. Jacquelyn Kelley died of lung cancer in Lansing, Michigan, May 5, 1988 at the age of 61.