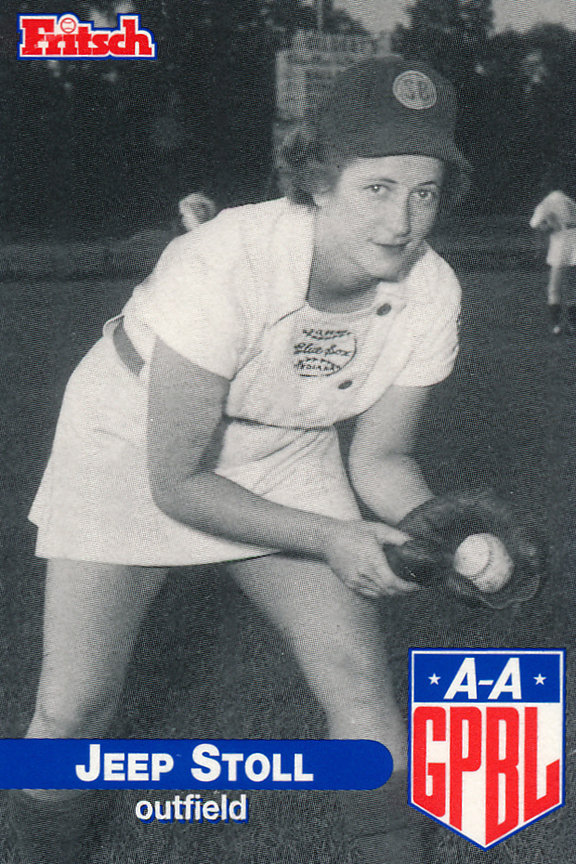 Jeep joined the AAGPBL in 1946, at the age of 17.  She was assigned to the Peoria Redwing where she played a fine defensive outfielder with a great arm.  In her nine year career with the league she played on several different teams, however, the majority of those years were with the South Bend Blue Sox.  A steady outfielder, she swung a big bat, hitting over .300 in each of her last three years in the league. She was named to the 1952 All-Star team.

Jane had her own dog grooming business in Chicago for many years.  She moved to Phoenix, Az. in 1984, working for AT&T until her retirement.

Listed at 5' 2", 135 lb., she batted and threw right-handed. An All-Star and veteran of three-champion clubs, Jane Stoll was a steady player whom managers could use as a starter, utility player, or as a pinch-hitter. She had the ability to play well all three outfield positions, mainly at center field, and was noted for her enthusiastic, positive, and hard team work. She made the most of her opportunities and averaged .247 lifetime during her nine-year career in the All-American Girls Professional Baseball League. A .140 hitter in her rookie season, she gradually improved her hitting to go along with her defense, batting over .300 in each of her last three years in the league. In addition, her career 312 runs batted in ties her with Joanne Weaver for 12th on the all-time list.

A native of West Point, Pennsylvania, Stoll played softball for the local teams during her high school years, where an AAGPBL scout spotted her and decided to talk to her parents about letting her join the league. She attended spring training in 1946 after graduating from high school and was rewarded with a contract to play for the Peoria Redwings.

Stoll struggled in her rookie season, hitting .140 in 58 games for last-place Peoria (33-79) in the eight-team league. In 1947 the AAGPBL moved its spring training camp to Havana, Cuba, and Stoll was one of about two hundred girls who made the trip, this time as a member of the Grand Rapids Chicks.

That season, Stoll collected a .163 average with 16 runs and 12 RBI in 71 games, while Grand Rapids finished second (65-47) and advanced to the playoffs. In the first round, the Chicks disposed of the South Bend Blue Sox in five games, and beat the Racine Belles in seven games to clinch the championship.

In 1950, Stoll continued her batting progress, raising her average to .271 while driving in 50 runs and scoring 40 times in 91 games. South Bend finished fifth with a 55-55 record, out of contention. By the time the 1951 season rolled around, Stoll was one of the established starters in the South Bend outfield, appearing in 101 of the 111 games for her team. She posted a .268 average with 46 runs and 47 RBI, while sharing outfield duties with Elizabeth Mahon and Betty Wagoner.

After the league folded at the end of the 1954 season, Stoll purchased and operated her own dog grooming business in Chicago, Illinois for many years. She then moved to Phoenix, Arizona in 1984, where she worked for AT&T until her retirement in 1995. She is part of the Women in Baseball permanent display at the Baseball Hall of Fame and Museum in Cooperstown, New York which features the AAGPBL and which was unveiled on November 5, 1988 in honor of the entire league rather than individual baseball personalities.

Jane Stoll died in her home in Arizona at the age of 71.