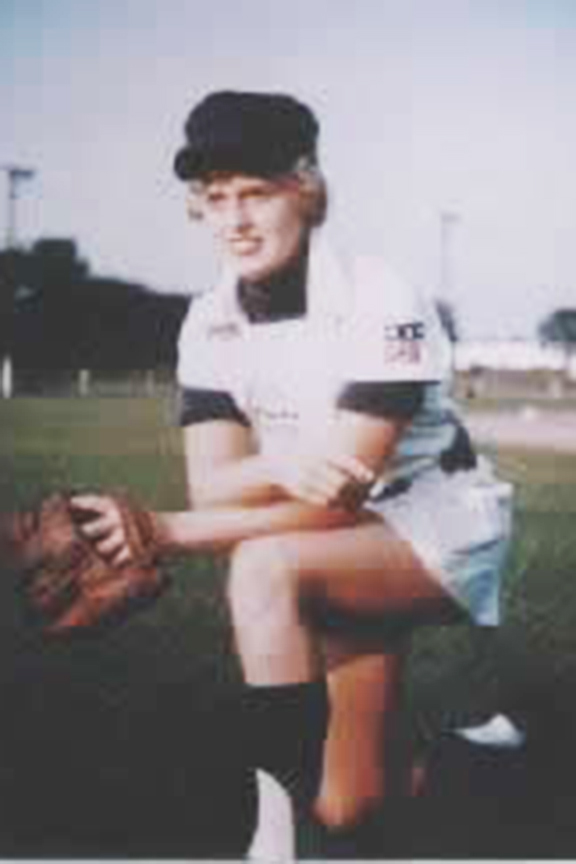 Mary was born in Minster, Ohio, a small town near Dayton.  At age 16, she was recruited to try out for the South Bend Blue Sox of the All-American Girls Professional Baseball League.  She signed with the Blue Sox in 1951 and played with them through 1954 when the league disbanded.

Mary lived with her husband Tom in Madison from 1958.  They have four children and six grand children, all boys.

Mary never lost her love of sports and played softball and coached in the City Rec Program until 1998.  Presently she plays tennis at Nielson Center during the winter and tennis and golf during the summer.  She states she loves the Badgers, Packers and Brewers.

In 2003, Mary was honored by having her name added to the Wall of Honor at the Brewers Stadium in MIlwaukee Wisconsin.

She was born August 26, 1934, in Minster, Ohio, to the late Sylvester and Florence (Rutschilling) Froning. While still in high school, at the age of 16, playing in a summer league softball tournament, she was discovered by a scout for the AAGPBL women’s baseball league and signed to a baseball contract in 1951 with the South Bend Blue Sox and played with the team until 1954 when the AAGPBL disbanded. The popular movie “A League of Their Own” depicted this league’s history and some of it’s players. When her baseball career ended, she had already finished her high school studies in Minster, so she moved to Rockford, IL where she worked in the drafting department of a large local company. She wanted an opportunity to travel, so she and twin sister, Martha, decided to apply for a stewardess job with American Airlines in Chicago in 1956. Both were hired and they were trained and stationed in Chicago for two years, flying American domestic flights. Both resigned from the airline in 1958 because they were planning to be married.

On September 5, 1958, she married Tom O’Meara (whom she met while in Rockford in 1956) and his job took them to Madison, WI, where she spent her entire married life, raising a family of four children. She managed to work a number of part-time jobs over these years while the children were in school, including several school lunch programs and the lunch shift at Bishop’s Cafeteria at Westgate. Even after the children had left home, she still continued some part-time work, finishing her working career at the Radisson Hotel in December, 2013, after eighteen years.

She lead an active sports life during her years in Madison, participating in city softball leagues, golf leagues and tennis programs. She actively managed and coached a number of adult and youth teams in softball, several of them teams when her children were playing. Everyone who knew her recognized her athletic ability and her competitive nature in any sport in which she participated. Mary experienced two very special events resulting from her baseball career that were high-lights in her life. The first was in the fall of 1988 when the Baseball Hall of Fame in Cooperstown, New York, opened a permanent exhibit in the Hall called “Women in Baseball” that honored the AAGPBL and many former players, including Mary, were in attendance. The second was in the summer of 2003 when she was invited by the Milwaukee Brewers to a game with Chicago that included throwing the first pitch and a ceremony honoring Wisconsin residents with baseball careers (major league, negro league and women’s league) and she had her name added to the “Wall of Honor” inside Miller Park. Mary was a loving and generous mother and grandmother who always found time to enjoy her family. Besides sports, she loved gardening, reading and doing artistic projects in painting and decorating. She was preceded in death by her twin sister, Martha Shachter, and her two brothers, James and John Froning.