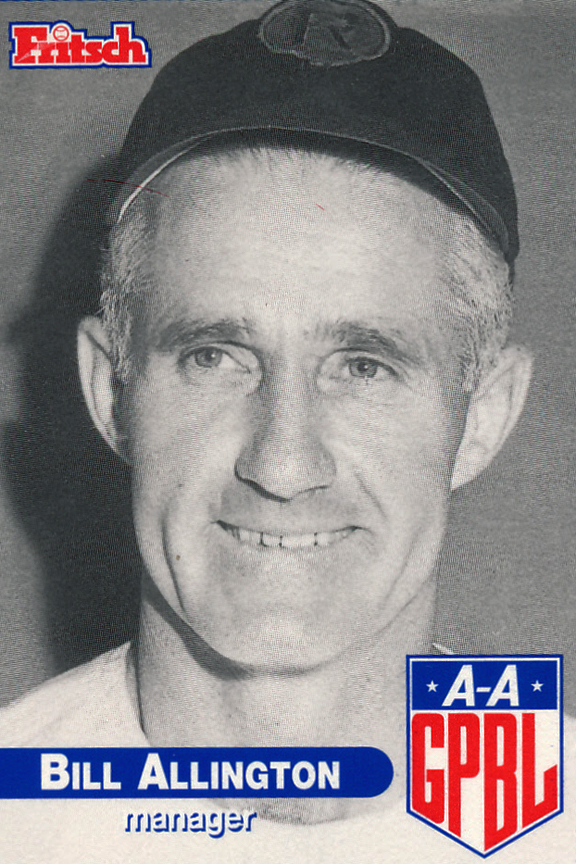 Bill was a tough taskmaster who expected maximum effort from his players. He also required that they know the rules of the game.  It was not unusual for Bill to give his players a pop quiz about the game he loved during bus rides to away games.

Bill was managing women's fast pitch softball teams in California when he became aware of the AAGPBL which at that time was fast pitch softball. He had a great record there, coaching a number of teams to State Championships. He had a very talented team in California and many players from that area went East with Bill when he accepted a manager position with the League.

After the League folded, Bill refused to give up on women's professional baseball and took players from the league on tour from 1955 through 1958.  Allington's "All-Americans" played mens teams across the U.S. and Canada. They traveled coast to coast and North into Canada and South into Mexico.

Bill passed away in 1966, but he will never be forgotten by the hundreds of women  of the AAGPBL who knew him as a great manager and friend.

Allington hit .300 or more in eight of his nine minor league year career. His most productive season came in 1931, when he led the Western League hitters with a .374 batting average. Unfortunately, he was left off of the All-Star Team that year after leading the league in several offensive statistics, including stolen bases (36), triples (23), total bases (335) and runs scored (167), while adding nine home runs and 92 runs batted in. In addition, he ended fifth in doubles (49), and his .984 fielding percentage was the second-best of any starting outfielder in the Western League that season.

Following his playing career, Allington coached in the minors from 1941 to 1944, before landing in the All-American Girls Professional Baseball League to become the most successful manager in the league's history. With Allington at the helm, the Rockford Peaches reached the playoff six times, winning the AAGPBL Championship Title in 1945 and in consecutive years from 1948 to 1950. Allington later managed the Fort Wayne Daisies in 1953 and 1954, leading them to the playoffs in both seasons.

From 1945 to 1954, Allington posted a 583-398 record for a .594 winning percentage, never had a losing season, and is the all-time leader in victories in the AAGPBL. He also was a talented active scout for the league.