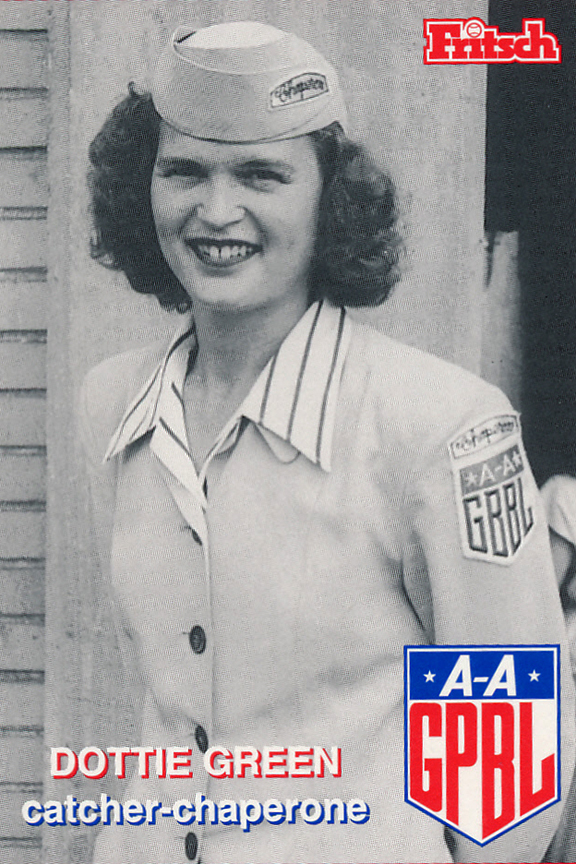 Dottie had a lifetime fielding average of .960 as an outstanding defensive catcher for the Rockford Peaches.  She injured her knee in 1947, which cut her playing years short, but continued on with the league as chaperone through the 1953 season.

In 1939-1941 she played for the Boston Olympets as a catcher and played in the Boston Gardens. She like all sports, riding and enjoyed writing to servicemen. She is also a musician she plays the trumpet and harmonica.

Dottie was admired and dearly loved by those who knew her.

Dottie Green, the savvy, strong-armed catcher for the original Rockford (Ill.) Peaches, who dominated the All-American Girls Professional Baseball League from its inception in 1943 to its demise in 1954, died on Monday, October 26, 1992 at her home in Natick, Mass. She was 71 years old.

According to Mary Bond, the longtime friend who took care of her during her final illness, she died of cancer.

Although Miss Green had the same first name, and played the same position on the same team as the character portrayed by Geena Davis in "A League of Their Own," the 1992 movie based on the famous women's league, that was merely a coincidence, according to those familiar with the league and the movie, including Kelly Candaele, whose story was the basis of the movie.

"Dottie was a popular name back then and we had a lot of Dotties," said Dottie Collins, a former member of the Fort Wayne Daisies, who recalled Miss Green yesterday as a smart catcher who handled her pitchers well and had a dead-eye throw to second.

"I was a pitcher and I know catchers," said Mrs. Collins, who also serves as the treasurer of the All-American Girls Professional Baseball League Players Association, the nonprofit organization that owns the rights to the league's name and emblems.

Dorothy M. Green, who was born in Natick, grew up as an all-round athlete and was captain of the girls' softball, basketball and field hockey teams in her senior year at Natick High School.

After graduation, she played semipro softball for the Olympettes, a women's team that played in Boston Garden.

When Philip K. Wrigley, the owner of the Chicago Cubs, decided to start a women's baseball league to keep up the nation's interest in the sport during World War II, Miss Green was one of several Olympettes recruited by the new league.

Assigned to the Rockford Peaches, one of the four teams that began play in 1943, she played four seasons, until a knee injury forced her to abandon her career. She was later a chaperone with the league.

She became a recreation officer at the state prison for women at Framingham, Mass., and was captain of the guards when she retired several years ago.

According to Miss Bond, Miss Green was not a fan of major league baseball until later life, when she began rooting for the Red Sox.

"She thought the men were too slow," Miss Bond said. "She said she didn't care to watch them."

Miss Green is survived by a brother and a sister.