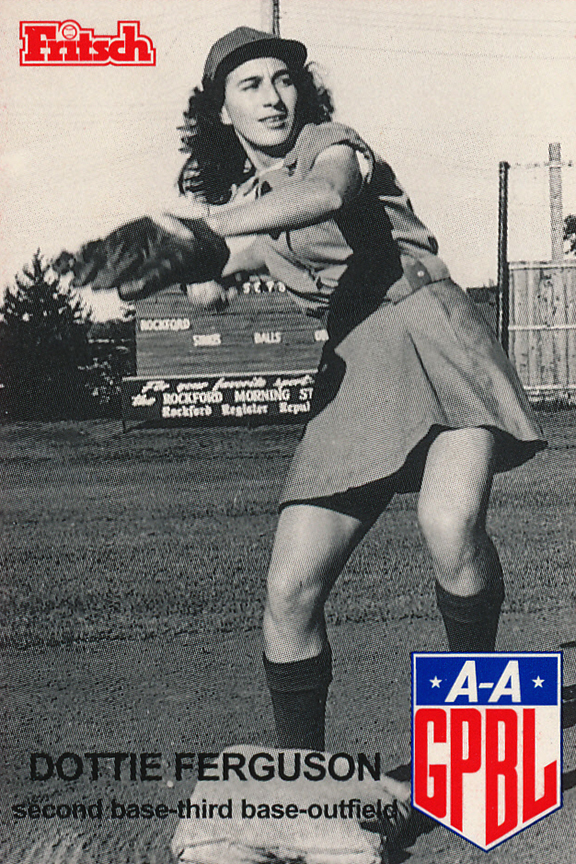 Dottie left Cananda to play baseball in the states. Her future husband, Don Key, followed her to Rockford and courted her. Both she and Don were speed skaters. Dottie also enjoy hourse back riding and hockey. After playing on many many successful Canadian teams , Dot made the jump to the AAGPBL and the Rockford Peaches.  Dottie was a speedy base runner who found many ways to get on base, including getting hit by pitches. Once on base she was a threat to steal the next base. Dottie also used her speed to track down balls hit into the outfield and steal many potential hits away form the other team. She became a fan favoite in Rockford and my the city her addopted home town till the day she passed.

Born at Virden, Manitoba on 17 February 1923, daughter of Elmer Ferguson and Violet Whiting, she was a contender as the North American Women’s Speed Skating Champion in 1939 but her ambition to perform for Canada in the 1940 Olympics were dashed when the Games were cancelled due to the Second World War. From 1945 to 1954, she played for the Rockford Peaches in the All American Girls Professional Baseball League. She was inducted into the Canadian Baseball Hall of Fame (1998) and the Manitoba Softball Hall of Fame (1998). She died at Rockford, Illinois on  May 8, 2003.